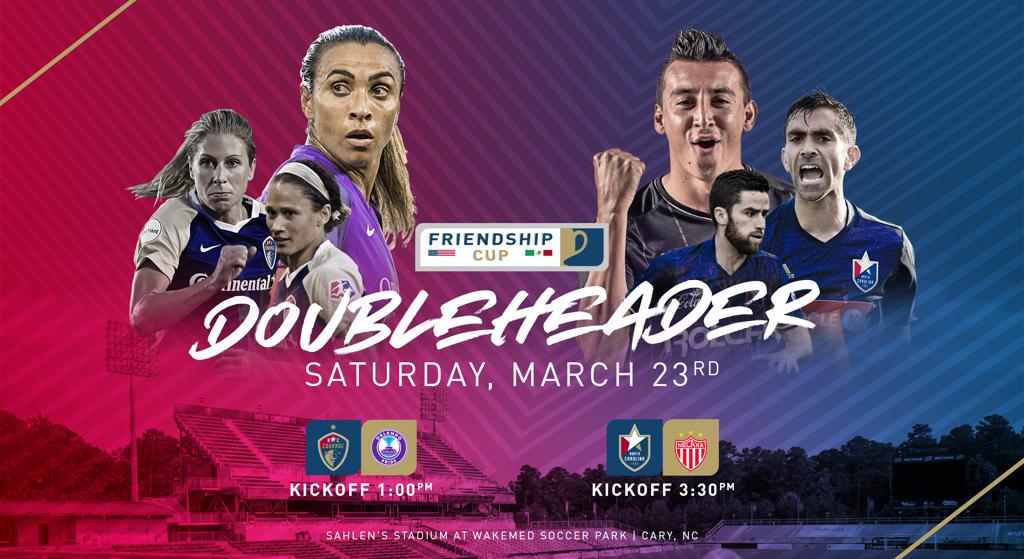 The 2018 NWSL Champion NC Courage will host Alex Morgan, Marta and the rest of the Orlando Pride at 1:00 p.m. in a preseason match followed by an international exhibition between NCFC and Necaxa of Mexico’s Liga MX at 3:30 p.m.

The doubleheader presented by the Hilton Garden Inn Durham Southpoint will be named the “Friendship Cup” to represent North Carolina Football Club’s commitment to building deeper ties to the best men’s and women’s professional soccer clubs in the world.

Season ticket members will have the opportunity to purchase doubleheader tickets during an exclusive 48-hour pre-sale window starting on Wednesday, Feb. 20 at 10:00 a.m. through Friday, Feb. 22 at 10:00 a.m. Season ticket members can purchase during this exclusive pre-sale window by logging into their Ticketmaster Account Manager page by clicking HERE, or by calling the Coastal Credit Union Box Office at 919-459-8144.

For non-season-ticket-members, tickets for these games can be purchased by buying a “Friendship Ticket Pack,” which gives buyers three (3) games for one low price.  Friendship Pack buyers will receive a ticket to both doubleheader games (Courage-Orlando game and NCFC-Necaxa game) plus the choice of either the NCFC home opener on March 9 or the Courage home opener on April 13. Prices for the Friendship Pack start as low as $30.

Any ticket holder for this doubleheader will also receive exclusive access to a special Necaxa closed practice and Necaxa player autograph session the day before the match (specific time TBD). Ticket holders will simply need to show their game ticket for entry into this special closed event.


“We are thrilled to provide another marquee event for our fans,” said North Carolina Football Club President and General Manager, Curt Johnson. “This is an exciting opportunity for us to showcase the passion for professional soccer in the Triangle to the world. These two matches continue our club’s tradition of providing our fans with some of the best of the best in worldwide soccer.”

Led by former US Men’s National Team coach Dave Sarachan, NCFC’s Austin da Luz, Steven Miller, Ben Speas and the rest of the NCFC squad will measure up against a club that boasts several Mexican internationals including goalkeeper Hugo Gonzalez and forwards Eduardo Herrera (on loan from Glasgow Rangers) and Angel Sepulveda, who have a combined 15 caps with El Tri. Honduran defender Bryan Beckeles and Argentinean forward Brian Fernandez are also part of the Necaxa squad.

"Necaxa is an established team with a long history of success in Mexican football,” said NCFC Head Coach Dave Sarachan. “We often talk about playing teams that will challenge us in different ways and a team like Necaxa certainly will be a great test for our group. It's not often that we would have the opportunity to test ourselves in a match like this during our season and we'll look forward to the challenge of facing a talented and experienced team like Necaxa."

2018 NWSL Champions Sam Mewis, McCall Zerboni, Crystal Dunn and the rest of the Courage team will face an Orlando Pride roster that boasts US Women’s National Team Co-Captain Alex Morgan and 6-time FIFA Player of the Year, Marta. The team is led by new head coach Marc Skinner, who joined the team in January following the departure of Tom Sermanni who took over as the New Zealand Women’s National Team head coach.

There have been several high-scoring matches between the Courage and the Pride in the past two seasons. The NC Courage scored 10 goals against Orlando in their three meetings during the 2018 season.

“Always good to get a preseason game against quality opposition,” said NC Courage Head Coach Paul Riley. “It’s about finding rhythm prior to the season starting and many times you get a false sense of security playing opposition that doesn’t play at the tempo, speed and physicality of an NWSL team. Orlando has a new coach and some terrific players. Top competition enables us to evaluate our consistency of performance at the highest level under pressure. Will be a fabulous tune-up to the real deal three weeks later.”