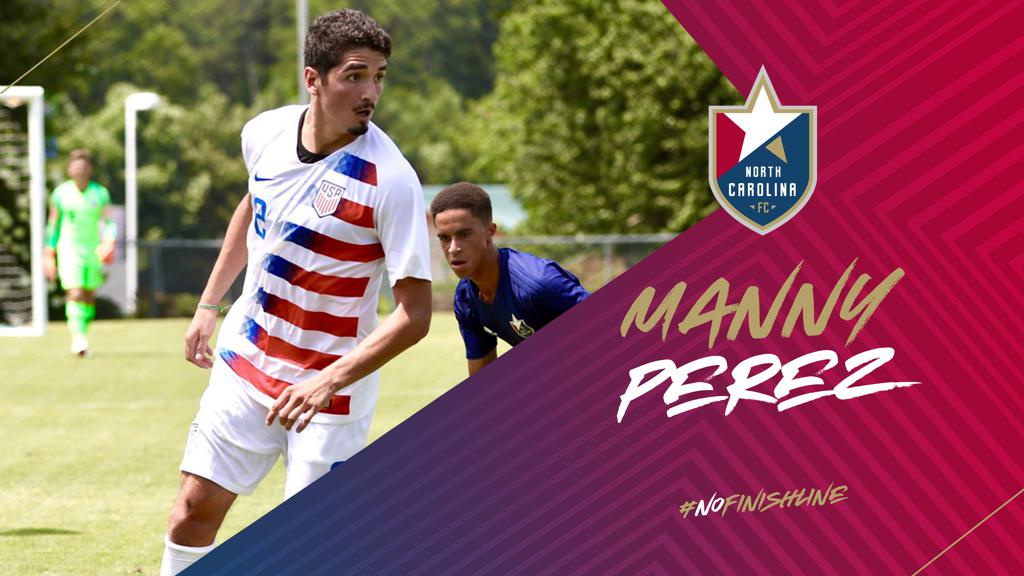 CARY, N.C. (January 31, 2019) – NCFC Youth Academy and United States U-20 National Team standout Manny Perez has signed with Scottish Premiership side Celtic FC and has been loaned back to North Carolina FC, pending league and federation approval as well as the receipt of his International Transfer Certificate.

The move is a testament to the hard work the young defender put in with the NCFC Youth Academy under the direction of current North Carolina FC assistant coach John Bradford as well as former NCFC defender and Academy coach Greg Shields. Perez is the latest youth product to join the professional ranks and his move serves as the most recent example of the club’s strong youth-to-pro pipeline. Perez will be the third Academy player on NCFC’s active roster, joining local products DJ Taylor and Dre Fortune.

“I’d like to thank Celtic FC for signing me and allowing me to continue my development at my hometown club,” said Perez. “I’m excited to start my professional career with NCFC and look forward to working with my new teammates and contribute to the success of the club.”

The 19-year old was a critical part of the NCFC Youth Academy from 2014-2017. In his final two Academy seasons, he appeared in 62 matches and recorded 20 goals. He also earned U.S. Soccer Development Academy Player of the Year honors for the East Conference in 2016 and was named to the U.S. Soccer Development Academy Best XI in the East Conference in 2017.

“This is such an exciting moment for Manny, and I couldn’t be happier for him,” said Bradford. “This move will be a massive step in his development and a great opportunity for him to begin his professional career. In our years with him in our academy, our staff knew there were big things ahead from him, even at a young age. It has been wonderful to see him earn DA accolades, college accolades, U.S. Youth National Team opportunities, and now starting his professional pathway. I am so proud of him and look forward to seeing him excel.”

Perez spent the last two years playing for NC State where he appeared in 29 matches, scored six goals and added nine assists. He was named ACC Freshman of the Year in 2017, and was ranked the No. 2 freshman on Top Drawer Soccer’s Freshman Top 100 List at the end of the 2017 season.

“We are thrilled to have Manny re-join NCFC on loan from Celtic FC,” said North Carolina FC President and GM Curt Johnson. “Celtic is one of the top clubs in the world with a storied tradition both on and off the field and we look forward to partnering with them.”

As a member of the U.S. U-20 Youth National Team, Perez was instrumental in helping the United States qualify for the 2019 U-20 FIFA World Cup and the 2019 Pan American Games in Peru, as the team captured the CONCACAF U-20 Men’s Championship last November.

Perez is expected to join NCFC at the start of preseason next week. North Carolina Football Club is excited to see Perez take the next step in his career and looks forward to developing even more talent through its youth-to-professional pipeline.

As the start of the 2019 season nears, now is the perfect time to purchase season tickets for North Carolina FC. This year’s deals feature many great packages and benefits, including the brand-new Auto-Renewal Program and traditional benefits such as priority purchasing for exclusive international exhibitions. Click here to learn more about season tickets or call the Coastal Credit Union Box Office at 919-459-8144 to speak with a ticket representative.