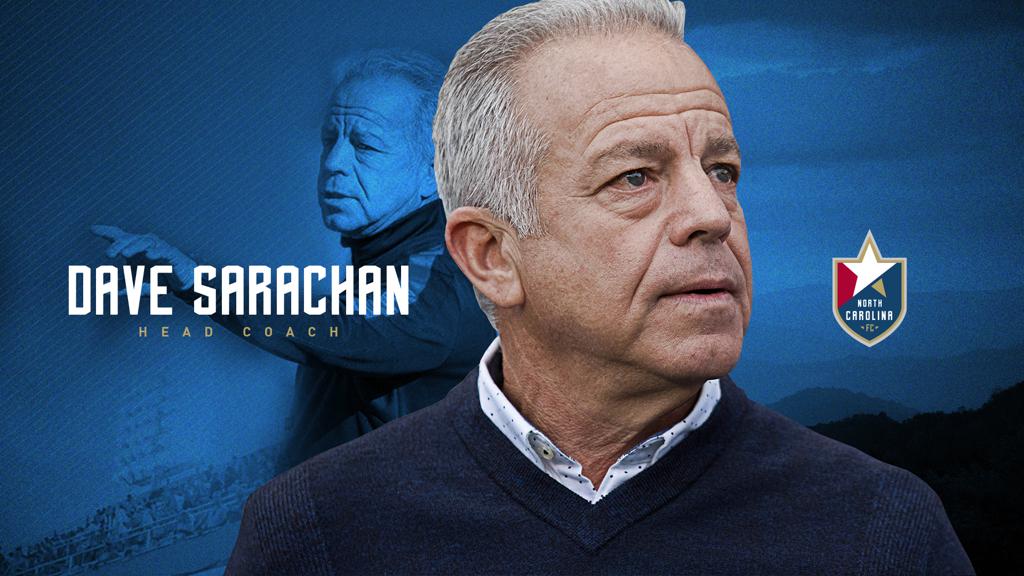 CARY, N.C. (December 17, 2018) –A new era is officially set to begin at North Carolina Football Club. Dave Sarachan, former United States Men’s National Team Manager, has been selected to lead North Carolina FC as the new head coach. In the next step of the club’s evolution, Sarachan will guide the professional team with an eye on the youth-to-pro pipeline and player development as NCFC Youth Academy Director John Bradford has been named assistant coach while remaining in charge of this key youth development role. In addition, Nic Platter has been promoted to Assistant General Manager and will continue in his role as goalkeeper coach. Additional technical side announcements will be made at a later date.

Sarachan, the fourth coach to be named to the team in its 12-year history, will be formally introduced to media, fans, and the entire NCFC family on Jan. 3, 2019.

"I am very excited to be joining NCFC as its head coach,” said Sarachan. “To have an opportunity to be aligned with quality people, excellent facilities, a soccer rich community and a shared philosophy in terms of vision and ambition is every head coach’s wish. I look forward to working with Steve and Curt and all of the NCFC family in building a team that we all will be proud of and that will contend for trophies."

Already a veteran coach with demonstrated results, Sarachan has produced multiple championship moments in his storied career. Notably, winning the MLS Supporters’ Shield and two Lamar Hunt U.S. Open Cup trophies as the head coach ofthe Chicago Fire.He also guided Chicago to an MLS Cup final and an additional U.S. Open Cup final. His monumental success in 2003 earned him MLS Coach of the Year honors. Sarachan compiled a 75W-57L-33D record in all competitions with the Fire.

The Rochester, N.Y., native most recently served as the USMNT interim manager from November 2017 to December 2018, while the search to find the national team’s next general manager and permanent head coach was underway. He famously guided the Stars and Stripes to several marquee results, including a 1-1 draw against reigning European Champions Portugal, a 1-1 draw away at eventual World Cup Champions France and a 1-0 victory over regional rival Mexico on home soil in September of 2018. Sarachan played a critical role in shaping the next generation of US Soccer talent, effectively setting up the future success of the federation. In total, Sarachan awarded 23 first caps to up-and-coming talents, laying the groundwork for a successful World Cup qualifying campaign for 2022 and beyond.

A member of Bruce Arena’s coaching tree, Sarachan gained experience as an assistant coach during two of the most dominant MLS dynasties. During the 1998 and 1999 seasons, Sarachan was part of DC United’s technical staff that won a Concacaf Champions League title in 1998 and the MLS Cup and MLS Supporters’ Shield in 1999. From 2008-16, Sarachan served as the Associate Head Coach with the LA Galaxy. During his stint in LA, the team won three MLS Cups (2011, 2012, 2014) and two MLS Supporters’ Shields (2010, 2011). Sarachan also spent time as an assistant during the USMNT’s 2002 World Cup quarterfinal run.

The veteran coach has guided teams to impressive results at nearly every level in the United States soccer system. First as a player, Sarachan earned Junior College All-American status at Monroe College in 1973 before transferring to Cornell, where he led the Big Red to an Ivy League title in 1975 and back-to-back NCAA Tournament appearances from 1975-76. Following a seven-year professional career, he held his first head coaching job at his alma mater, Cornell, from 1989-1997. His 15W-2L-1D season in 1995, which included an Ivy League title and NCAA Tournament appearance, still stands as the best season in program history for Cornell.

Sarachan and John Bradford will look to guide North Carolina FC to new heights. Together they will continue to evolve the technical side of the club by strengthening the relationship between NCFC Youth and the professional team.

“Dave, John and Nic have proven records when it comes to player development,” Johnson continued. “Winning while at the same time developing the highest-level young talent our country has to offer is the goal and our day-to-day opportunity.  We have the largest youth-to-pro club in the country and we believe we can be the best at developing homegrown talent.”

"When I was here in March with our National Team, I had the opportunity to visit with the NCFC Youth Academy and club,” Sarachan continued. “I was very impressed with their program and commitment to developing players at the youth level. As I take on my role as head coach of the first team, I am very committed to the connection of the entire organization to raise the bar on our youth-to-pro philosophy."

Bradford has coached NCFC Youth Academy teams to record heightsbuilding one of the top academy programs that has had 26 different Youth National Team players and 91 committed college players from the program over the last five seasons.

The North Carolina native has a proven track record on the player development front and has helped current North Carolina FC players Dre Fortune and DJ Taylor move to the professional ranks after successful seasons in the club’s Academy system. He has also regularly guided a growing list of homegrown Academy products to professional, college and youth national team experiences.

“John’s player development record speaks for itself,” said NCFC Youth CEO Gary Buete. “Joining Dave, and Nic on the coaching staff is a tremendous opportunity for him and strengthens our club’s collective goal of developing elite players at every level.”

Platter has now moved up the organizational ladder to the executive level. He started as a goalkeeper with the club in 2010, before becoming a player-coach in 2012, and eventually becoming a full-time member of the technical staff in 2015. Platter’s work on and off the field has been instrumental in building the team over the past few seasons.

The moves continue to instill the club’s values of promoting from within while strengthening its pathway to professional soccer.

Season tickets for North Carolina FC’s 2019 season are on sale now and feature many great packages and benefits – including the brand-new Auto-Renewal Program and traditional benefits such as exclusive meet the team opportunities. Click here to learn more about season tickets or call the Coastal Credit Union Box Office at 919-459-8144 to speak with a ticket representative.