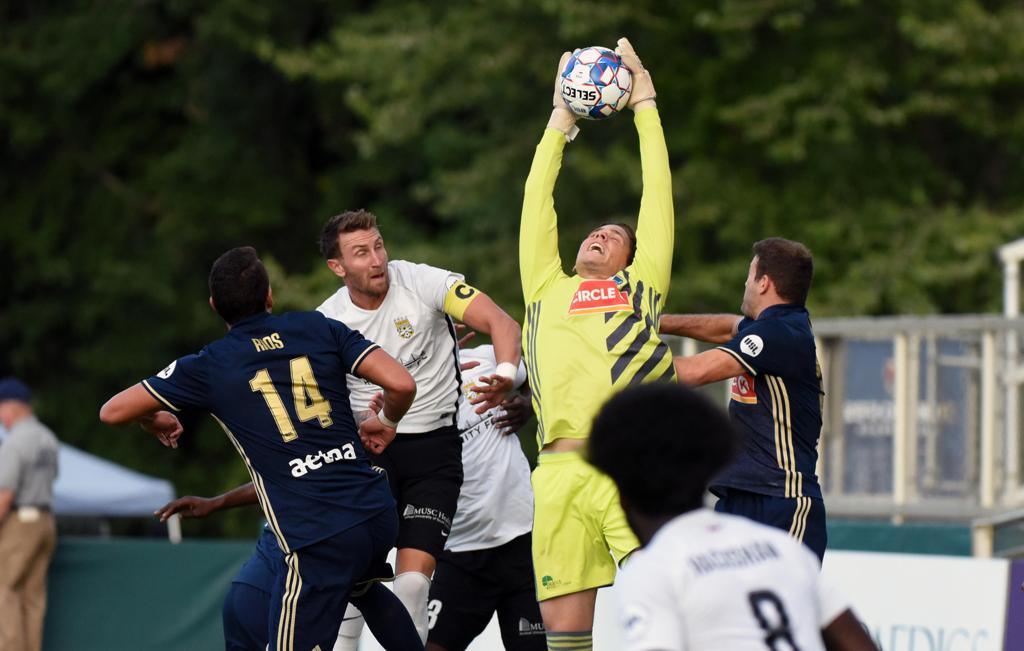 Trailing by a goal as the end of the second half approached, NCFC pulled even as forward Daniel Rios scored his ninth goal of the season, tied for the USL lead, in the 81st minute off an assist from 18-year-old midfielder Nelson Blanco.

Seven minutes into stoppage time, NCFC nearly stole a victory, firing off several shots on target in the game’s closing seconds, including an effort by midfielder Tiyi Shipalane that hit the right post.

“The game, I felt, we had a lot of good possession, and didn’t make their ‘keeper work enough,” NCFC head coach Colin Clarke said. “A bad mistake (Charleston’s goal) let us at the back, and then we came back to get a point out of it – could have been three.”

Scoring chances were few and far apart for both teams in the first half, as they combined for two shots on target in the opening 45 minutes.

NCFC’s best chance at taking a first-half lead came in the 12th minute, when midfielder Austin da Luz astutely noticed that Battery goalkeeper Joe Kuzminsky was off his line, and decided to let loose on a shot from 40-plus yards out, forcing Kuzminsky to tip his shot over the crossbar.

While he had little to worry about early on, NCFC goalkeeper Alex Tambakis saved a threatening shot from Charleston’s Angelo Kelly-Rosales two minutes into first-half stoppage time, and both teams went into the half without a goal.

Ten minutes out of the break, NCFC was forced into making its first change of the night, when da Luz suffered an injury and was replaced by Shipalane in the 55th minute.

Not long after running onto the field, it was Shipalane who nearly put NCFC ahead in the 57th minute, as he made a run to the left side of the 18-yard box and was played in by Marios Lomis. Unfortunately for Shipalane, Charleston’s Kuzminsky was alert to the danger and slid to break up the attack.

After a spell of NCFC possession, the visitors scored the game’s opening goal in the 63rd minute when Charleston’s leading goal scorer, Ataulla Guerra, converted from 17 yards out, placing his effort in the lower left corner.

Not long after going behind, NCFC nearly equalized through Rios, whose glancing header off a cross from right back Steven Miller went just wide in the 70th minute.

Eventually, Rios’ persistence paid off, as he redirected a low-lying cross from Blanco, a substitute, into the net in the 81st minute, providing the equalizer for NCFC.

Both sides had a good amount of time to score a winner, as the fourth official announced seven minutes of stoppage time. Neither team could break through, although NCFC came tantalizingly close.

Up Next:
NCFC will make its second trip to Pennsylvania this month and complete its season series with Bethlehem Steel FC on Saturday, July 14, at 5 p.m.

Game Changer:
The introduction of Blanco, who came on in the 76th minute, did wonders for NCFC. Making just his second USL appearance, the midfielder was active out on the left flank and his direct style of play led to Rios’ game-tying goal.

They Said It:
“Right now we have to take it game by game, and I think that’s what we’re doing. Obviously, like I said, it sucks that we didn’t get three points, but a point now is massive – against a team that’s above us in the table, where we want to be. We’ll take the positives from it and move on.” – NCFC midfielder Kyle Bekker

Notes:
– NCFC is unbeaten in its three latest home matches.

– Saturday’s match was NCFC’s first against the Battery in an official competition since the 2010 Lamar Hunt U.S. Open Cup.

– With his assist on Daniel Rios’ goal, Nelson Blanco picked up the first point of his professional career.

– Goalkeeper Alex Tambakis, who entered Saturday leading the Eastern Conference in saves, made four saves against Charleston, bringing his season total to 55.