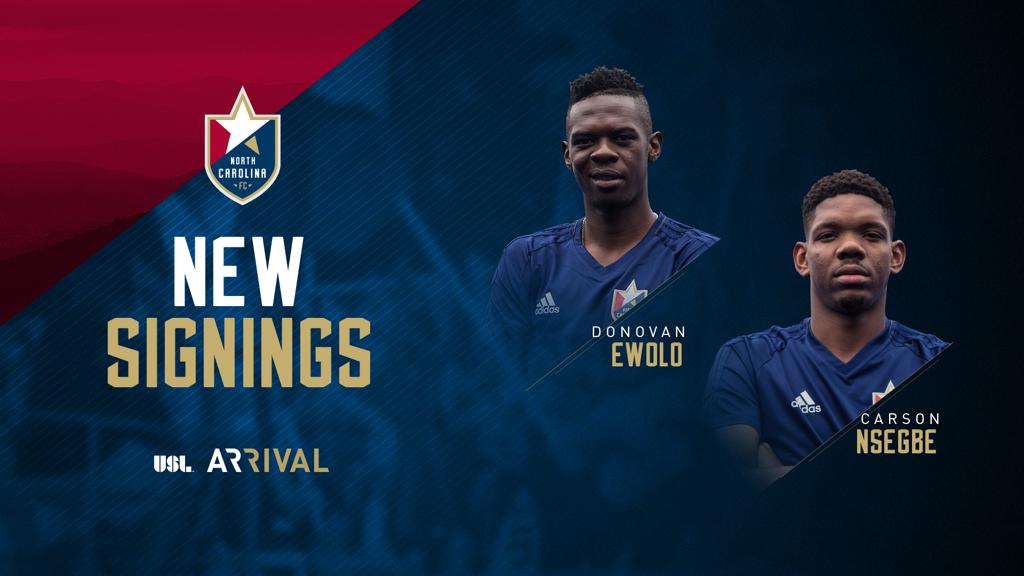 CARY, N.C. (Feb. 19, 2018) – North Carolina FC continues to secure pieces for its roster ahead of the 2018 USL season, as defender Carson Nsegbe and forward Donovan Ewolo are set to join the team pending league and federation approval.

Nsegbe comes to NCFC on a transfer from Cameroonian side Rainbow FC Bamenda. Ewolo will join NCFC on loan from Czech third division side MFK Vyskov. Both signings will occupy international roster spots and are still pending the receipt of their International Transfer Certificate.

The young Cameroonian duo is expected to provide increased talent and depth to the North Carolina FC roster. Both players have taken similar journeys and have played with both Rainbow FC and AS Fortuna in the Cameroonian professional ranks. Rainbow FC is a club in Cameroon that has an emphasis on giving many of its young players an opportunity to play professionally in the United States. The USL and MLS have both tapped into the pipeline, signing numerous emerging talents to professional opportunities in the United States.

“We’re excited about both of them,” said North Carolina FC Head Coach Colin Clarke. “They’ve only been here a few days, but you can see how hungry they are and how much they want to make it work. They’ve both got great ability and great athleticism. We’re looking forward to seeing them progress, develop and play at the highest level possible. Rainbow FC is a club that gives young Cameroonians an opportunity to come to the States and we’ve been asked to be one of those clubs to help facilitate that.”

Nsegbe will bring a strong defensive presence to the squad as well as professional experience playing in Cameroon. The defender has also been a regular on Cameroon’s youth national team with call ups at the U-17 and U-20 levels.

Ewolo comes to NCFC after several stops both in his home country of Cameroon and abroad. In addition to his time with Rainbow FC and a stint with AS Fortuna, the athletic forward played in Cameroon with Dragon Club de Yaounde in the top division of Cameroonian soccer. Following several trials in Europe, Ewolo signed with MFK Vyskov – a third-division Czech Republic team before joining North Carolina FC on loan this year. Ewolo also boasts international experience with Cameroon and has represented his country since the U-17 level and most recently has played for the Cameroon U-23 team.