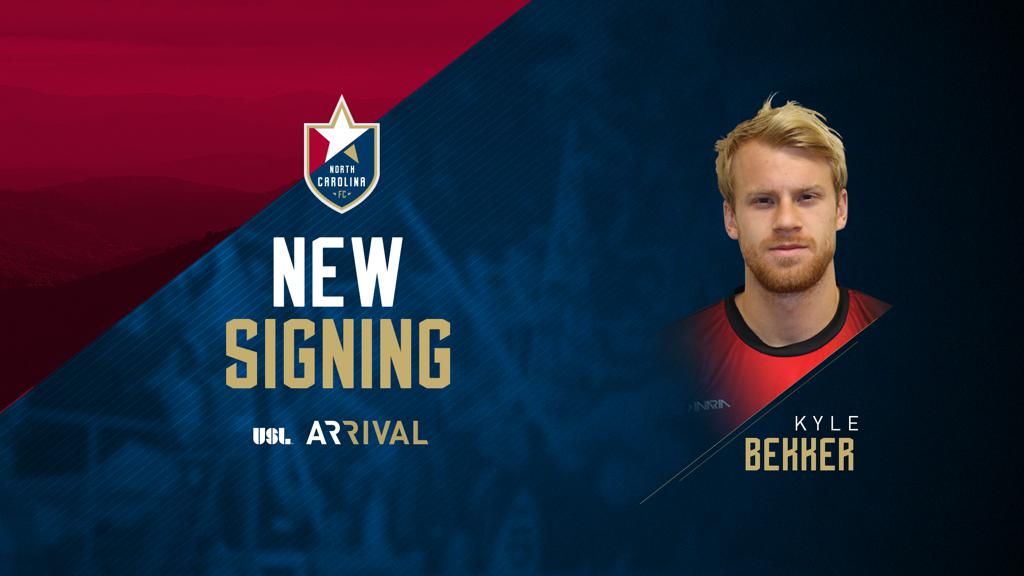 “First of all, we’re delighted to get Kyle signed,” said North Carolina FC Head Coach Colin Clarke. “He’s an experienced player who has played for the Canadian National Team. He has several years of MLS experience and he’s coming off a season where he won the NASL Championship with San Francisco. He has the leadership quality we’re looking for and is a proven winner. He’s someone who I feel will be one of the best midfielders in this league, and is an important signing for the club. We’re expecting Kyle to come in and be a big part for the club in this year’s USL season.”

Bekker boasts a lengthy resume filled with MLS and international playing experience. He has made stops with Toronto FC, FC Dallas and the Montreal Impact of Major League Soccer, while earning regular minutes with the Canadian National Team since 2013.

“I’m very excited to meet all the boys and get to work,” said Bekker. “I think we’ve got a solid core group of experienced players who know the type of league and have played at a high level. We also have a solid group of exciting and dangerous young players. If we can build that winning culture throughout the locker room early on, there is no doubt we can do something special this season.”

Bekker joins the club following one season in San Francisco where he helped the Deltas capture the 2017 NASL Championship. In 2017, he logged 2,179 minutes in 30 NASL matches. The experienced midfielder was a key contributor for the squad and scored three goals adding a team-high four assists.

Following a standout career with Boston College, the midfielder was selected third overall in the MLS SuperDraft by Toronto FC in 2013 to begin his professional career. During his two years in Toronto, Bekker played 2,037 minutes of MLS action before being traded to FC Dallas. After a short stint in Dallas, he was traded again, ending up with the Montreal Impact in July of 2015. In his two years at the club, Bekker made 21 appearances, logged 1,317 minutes and scored two goals for the side in MLS play.

Bekker has also made his mark for the Canadian National Team. Since his first call up to the squad in 2013, the Oakville, Ontario native has appeared 18 times for his country, making 10 starts. He has contributed two assists for the national team and was listed as a part of the 23-man squad that participated in the 2013 CONCACAF Gold Cup.