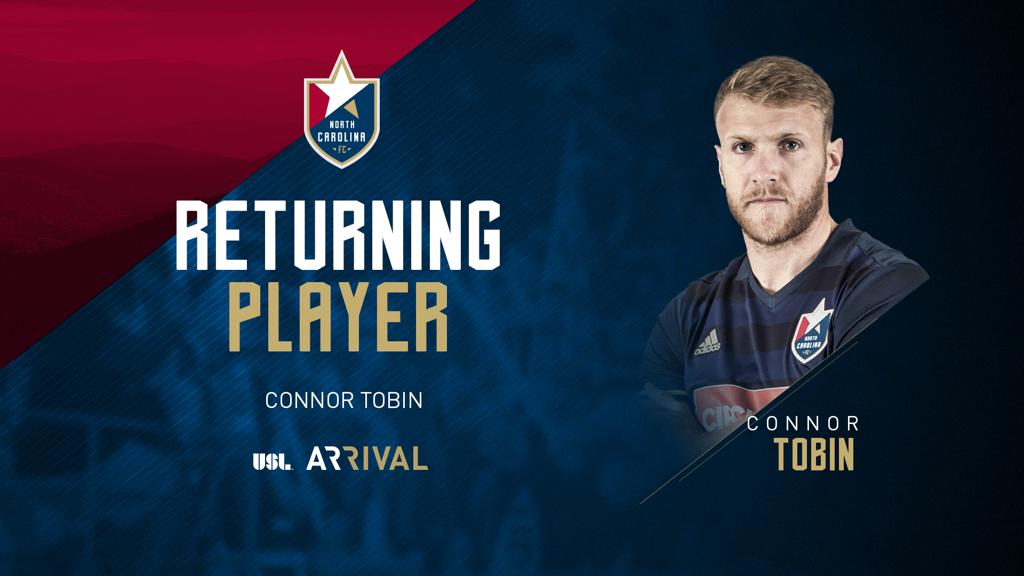 “We’re delighted to get Connor back and get him signed,” said North Carolina FC Head Coach Colin Clarke. “He’s an important part of what we’re all about here. He’s entering his fifth season with us. It’s not only what he does on the field, but what he’s involved in off the field. He's a leader and a big voice from the team in what goes on in the community. The offseason is always too long for Connor. He’s chomping at the bit to get back. It’s great to get him signed and he’s a big part of our squad and what we’re building this year. We’re looking forward to another good season from him.”

Since arriving from Minnesota United in 2014, Tobin has been a mainstay on the field and in the community for the club. The defender has racked up 118 appearances and eclipsed 10,500 minutes on the field across all competitions for North Carolina FC, making him one of the most tenured players in club history. The defensive veteran was named a 2017 NASL Best XI selection last year for his excellent play on the backline.

“I’m very excited to be back,” said Connor Tobin. “It’s an organization that has become my home and to come back is nice. This will be a year of change going to the USL and change always brings opportunity. On the field, just like every year, I’m looking forward to doing my best and helping the group ultimately win a championship. Off the field, I want to help make this club one of the most fan-centric clubs in the United States.”

Tobin is also a prominent member of the community. In addition to winning the Summit Hospitality Community Service Award every year since his 2014 arrival with the club, Tobin is heavily involved in coaching youth soccer and is a founder of the Oak City Classic at Raleighwood – a Triangle based fundraiser.

“There will be a year two of the Oak City Classic at Raleighwood,” added Tobin. “The community here is what makes this club special. To be able to give back to the community is something that I take a lot of pride in. I hope that we have a successful year two.”

Following four years at the University of Vermont, Tobin started his professional career with Nybergsund in the Norwegian first division in 2009. Tobin made his way back to the United States in 2011 and spent one season in the USL with the Rochester Rhinos where he made 17 appearances. He then moved to Minnesota United in 2012 and spent two seasons with the Loons. Tobin played a big role in the success of the club, making 33 league appearances and helping Minnesota reach the NASL final in 2012.