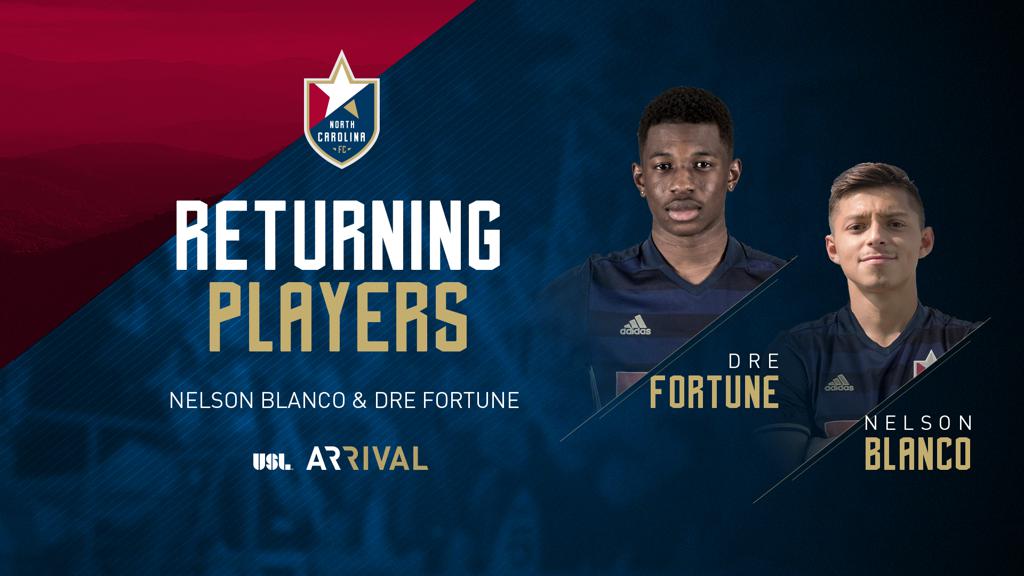 CARY, N.C. (Jan. 29, 2018) -- Dre Fortune and Nelson Blanco have re-signed with North Carolina FC for the upcoming 2018 USL season, adding quality and depth to a developing roster. The moves are pending league and federation approval.

The midfield duo returns for their second season with the club and will look to continue their successful play that helped lead North Carolina FC to the postseason in 2017.

“We’re very excited to have Dre back with us this year," said NCFC Head Coach Colin Clarke. “He had a good breakout year with us last season. He’s a good kid with a lot of potential and he can accomplish big things. He has a bright future in the game and will go a very long way.”

“Nelson is a young kid that we brought in last year. He can play wide. He’s got pace and good one-on-one ability. It’s an important year for him to step up, get minutes on the field and contribute to the team. I think he’s another exciting young talent.”

In 2017, Fortune worked his way into a starting role in the midfield and played over 1,300 minutes across all competitions. The Raleigh native tallied three goals and added three assists during the season. In addition to Fortune’s midfield prowess, the talent is also known for his accuracy on free kicks and set pieces, which will bring an added element to NCFC’s attack.

“This is another big year for the club, particularly with the transition to the USL and I’m happy to be a part of it,” said Fortune. “We’ll be looking to establish ourselves as a dominant force in the league and hopefully go on to win the title.”

Fortune is part of a thriving pipeline between the senior team and NCFC Youth Academy. The midfielder became the first ever Academy prospect to sign a professional contract with the club in 2017. The Raleigh native is one of three players currently on the roster that have also starred with the Academy, joining D.J. Taylor and George Marks.

Blanco returns to North Carolina FC after the club signed the emerging talent to his first professional contract in October of 2017. The speedy midfielder did not feature for the squad last season, but has continued to develop as a promising prospect. The native of El Salvador can play on the wings or in the middle as a No. 10.

"I’m excited to be back with North Carolina FC," said Blanco. "It was an honor training with them at the end of last season. I’m happy to start my rookie season and set my mark with the team. I want do my best to help the team and staff by getting on the scoresheet as much as possible and of course, winning the league."