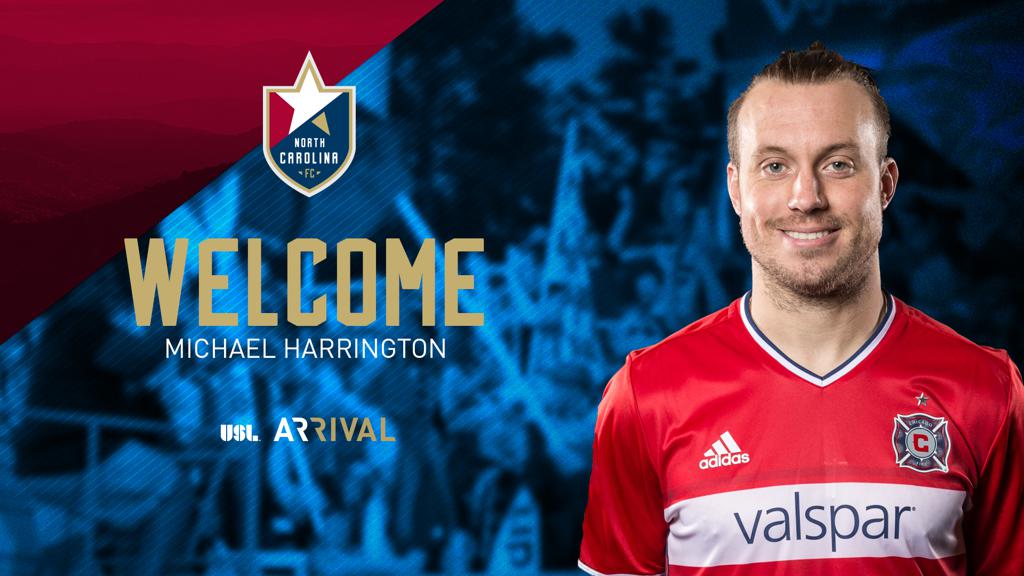 “I’m excited to add someone with his caliber and experience to the squad,” said North Carolina FC Head Coach Colin Clarke. “He’s played in MLS and had a good career there for many years and we’re excited to bring him back home.”

“It’s important to bring players in with that experience. He’s a good person with high character. He’ll help us on the field and his leadership will help some of our young prospects and teach them to be better professionals.”

While the upcoming season marks Harrington’s first with the club, the talented left back is no stranger to the area and has been intertwined with the rich soccer tradition in the state of North Carolina throughout his storied career. The veteran defender will bring a wealth of experience to NCFC with over 20,000 minutes of MLS action under his belt.

Harrington was born in Greenville, N.C., and played youth soccer for CASL (now NCFC Youth) before joining the United States U-17 residency program and IMG Soccer Academy in 2001. Harrington was a prominent member of the U.S. Youth National Team, earning his first national team call up at the U-14 level. Harrington represented the United States at several high-profile international tournaments, including the 2003 FIFA U-17 World Championships and the 2005 FIFA U-20 World Cup.

“I'm extremely excited to be coming back home to continue my playing career as the Triangle area is at the root of my youth career and is where I proudly represented the Tar Heels for four years as well,” said Harrington. “I’m thankful to Colin and his staff for the opportunity and I intend on doing everything I can day in and day out to make our team as successful as possible on and off the pitch.”

Harrington played college soccer for UNC from 2003-2006 where he was a two-time All-ACC selection and led the Tar Heels to the NCAA Tournament all four years - including a run to the quarterfinals in 2005. During his college career, the defender scored four goals and added 14 assists. He spent three seasons with Raleigh CASL Elite (now North Carolina FC U23) in the Premier Development League from 2004-2006.

The defender started his professional career as a highly-touted prospect and was drafted third overall in the 2007 MLS SuperDraft by the Kansas City Wizards (now Sporting KC). He spent six seasons in Kansas City. His time with the club was highlighted by winning the 2012 Lamar Hunt U.S. Open Cup and making the MLS Cup Playoffs on four occasions.

Harrington was traded to the Portland Timbers in 2013, where he helped lead the Timbers to the Western Conference Finals. Following a two-year stint in Portland, he played for the Colorado Rapids in 2015 before spending the last two seasons with the Chicago Fire. In total, Harrington made 258 MLS appearances and played 20,492 minutes between regular season and postseason play. He totaled five goals and 19 assists during his MLS career.

Harrington has faced North Carolina FC once in his career, appearing as a substitute in Kansas City’s 4-2 (AET) U.S. Open Cup victory over NCFC in 2008.

Season tickets for North Carolina FC’s 2018 season are on sale now. To ensure you don’t miss a moment of the action, secure your seats at Sahlen’s Stadium at WakeMed Soccer Park by clicking here or calling the North Carolina Football Club Ticket Office at 919-459-8144.