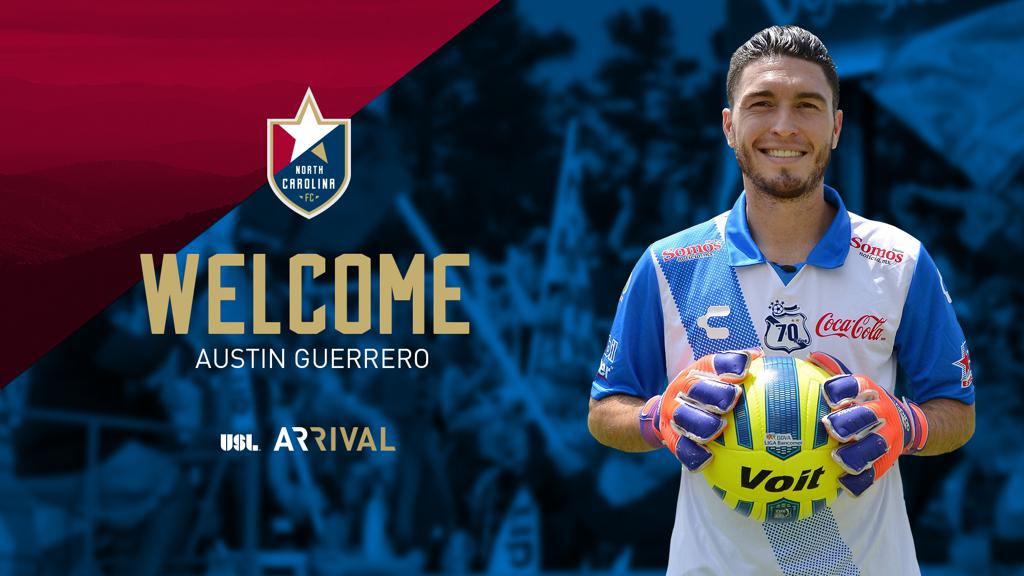 CARY, N.C. (Dec. 15, 2017) - North Carolina FC has bolstered its goalkeeping position with the signing of former Liga MX goalkeeper Austin Guerrero. Per club policy, terms of the deal were not disclosed.

“Austin is a goalkeeper we’ve known for quite some time,” said NCFC Goalkeeper Coach Nic Platter. “He trained with the club about five years ago, but the timing wasn’t right.  Since then, he’s spent his time playing in Mexico and Panama, and has improved his game as a professional.  Austin will be an exciting goalkeeper to watch, as he is a solid shot stopper and his distribution suits our style of play.  We look forward to having Austin for the 2018 season.”

Following a storied youth and college career in the United States, Guerrero took his talents to Central America where he developed his skills with multiple teams in Mexico and Panama.

“I’m looking forward to making North Carolina my home,” said Guerrero. “There is an obvious passion for soccer in the region, and the fan’s energy and appreciation are what inspire me to play the game.”

The goalkeeper spent last season with Alianza FC of Liga Panameña de Fútbol – the top tier of soccer in Panama. While playing for Alianza FC, Guerrero logged 1170 minutes in 13 appearances for the side.

Prior to his time in the Panamanian league, Guerrero played with three clubs in Mexico including Liga MX sides Puebla and Tigres UANL and Ascenso MX side Altamira FC.

Guerrero made the move to Mexico in 2012 and signed with Tigres after a highly successful college career with the University of Portland. After splitting time with Tigres II and the first team, Guerrero was loaned to Altamira FC (now Cafetaleros de Tapachula), where he played over 2,000 minutes in 25 matches in Ascenso MX – the second division of Mexican soccer. The goalkeeper was also loaned to fellow Liga MX side Puebla in 2016, but saw limited action before making the move to Alianza FC in Panama for the 2017 season.

Guerrero spent his college career playing for the Portland Pilots from 2007 to 2010. He concluded his college career as one of the most decorated goalkeepers in Portland’s history. He was a three-time All-WCC First Team selection and became Pilot’s all-time leader in saves with 346. Guerrero made one appearance for the U.S. U-20 Men’s National Team in 2008, earning a shutout in a 0-0 (4-2 PK) win against Honduras.

Season tickets for North Carolina FC’s 2018 season are on sale now. Fans can secure their seats at Sahlen’s Stadium at WakeMed Soccer Park with a $50 deposit. To ensure you don’t miss a moment of the action, click here or call the North Carolina Football Club Ticket Office at 919-459-8144.