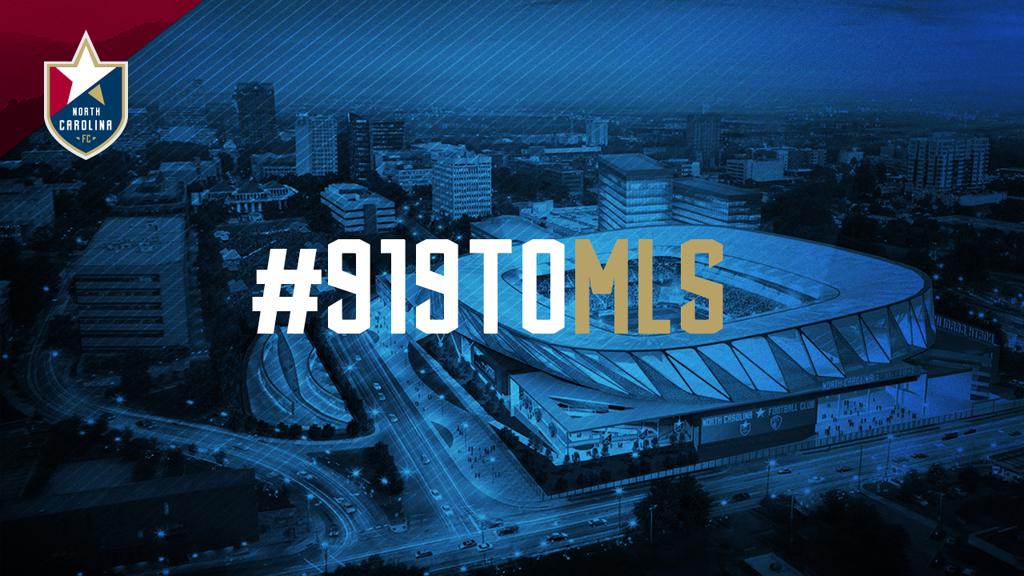 RALEIGH (Nov. 29, 2017) - Since the rebrand on Dec. 6, 2016, the North Carolina Football Club has been working hard to bring a Major League Soccer (MLS) franchise to Raleigh. While the club is not among the four finalists to be awarded one of the first two expansion spots, the vision and plan to bring the MLS to Raleigh is still in place. North Carolina FC is firmly in the running for the final two expansion slots which will be selected from the 10 remaining expansion markets.

For North Carolina Football Club Owner Steve Malik, the bid has always been a calculated process, carefully working out the details to ensure the progress is genuine and completed correctly. As Malik has said many times before, “It’s not if, but when.”

The tangible evidence that the team has accomplished in less than a year has been substantial. From the addition of the NC Courage – one of the best women’s professional soccer franchises in the world, the collaboration to create the largest youth-to-professional club in the country with the creation of NCFC Youth, extending the club's footprint in the community and growing fan and corporate support, NCFC is clinically checking off the boxes that MLS has prioritized for expansion teams.

The work the club has completed in the last year has produced a strong foundation for it to stand on, as it continues to represent an area deeply ingrained in the soccer culture of the United States. Most recently, North Carolina FC joined the United Soccer League (USL) ahead of the 2018 season and will compete in one of the most prominent Division II professional soccer leagues in the world, which enjoys a strong partnership with MLS and will reestablish regional rivalries that have existed since the 1990s.

One of North Carolina Football Club’s biggest projects to finish is the downtown Raleigh entertainment, sports and athletics complex deal, which will be a crown jewel for the Raleigh community and revitalize the North end of downtown Raleigh. The project is expected to bring more than $2 billion to the state over several years.

With the complexity of the project, it has taken time to work out the many details that include infrastructure improvements to roads and highways, tearing down buildings, relocating government workers and planning for the new additions of office space, restaurants and a stadium with more than 20,000 seats. The club has had numerous encouraging conversations with members from local and state government that signify a solution to completing the deal is attainable.

“We came forward with a plan that was downtown,” said Malik. “We knew that it was going to be more challenging. It’s a state property and there is a state government complex on the land. People have a lot of questions about that, but generally the response has been super positive. At the same time, they’ve wanted to have detailed questions answered.

We’ve had numerous meetings that have gone well with a lot of different parties. This is a long-term project and I think we’ve made a lot of progress. We’ve been engaged in the process and we’re going to continue to make progress on our site.”

The work on will continue as a completed stadium deal will make Raleigh’s bid for the MLS among the strongest out of the remaining 10 expansion candidates at the start of 2018.   The selected site meets all of MLS’ requirements with a soccer specific grass field in a dense urban core rich with the proper targeted soccer fan demographics all while growing rapidly.

In addition to finishing the stadium deal, the club is also putting a strong focus on increasing attendance and drumming up additional corporate support.

What You Can Do to Support the Bid:

Show your pride for the club and our mission by getting our brand out in the community. The more people that see our logo and learn about our mission the better. Wear our merchandise and display our accessories on your car and home. Click here to buy merchandise.

Support the teams at a game

One of the biggest things we can do to show the MLS that we’re passionate about winning a franchise is selling out our stadium. Buying tickets and showing up to games in force will go a long way in proving the Triangle’s support for the top level of soccer. 2018 tickets are on sale now.

Talk to your elected officials

Let your elected officials know that you value an MLS franchise and want to see one awarded to the Triangle. Let them know how you think a new downtown entertainment and sports center would contribute to the quality of life of the Triangle. Write letters and call in to your politicians.

Talk to your business leaders and friends

Keep spreading the word and let people know where we stand in the expansion hunt. Create new fans by bringing them to the game and let your business leaders know that we’re open to working together.