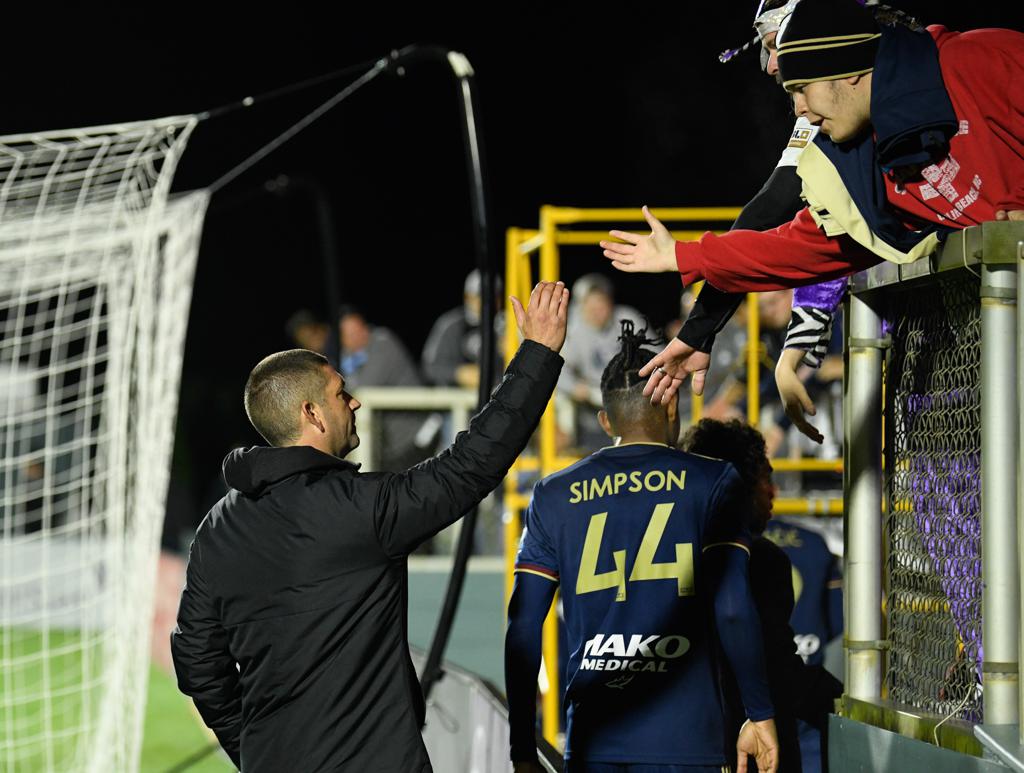 After wrapping up player meetings and taking some time to reflect on the 2021 North Carolina FC season, I wanted to take a moment to thank everyone who made this year a memorable one, despite the many obstacles our team faced. No excuses for our failures — only genuine appreciation for the individual successes, the opportunity to be in the trenches together with good people, and a determined outlook for the future.

In January, our club made a transition to compete in USL League One, to better support a connection with our NCFC Youth Academy Program and to embark on a long-term project centered on player development. With no players signed as of February 1 and a limited budget compared to past seasons, we began to build a roster that would feature less overall professional players and include a combination of returning NCFC players, young professionals still early in their careers, and several players from our NCFC Youth Academy.

Getting players into the market, medical conditions, injuries, and other things have been real factors that greatly impacted our team from start to finish — all with already thin margins for error. We fielded a younger and less experienced roster than our opponents in all 28 games this season, yet our players always took on the challenge with pride and belief.

We have already started working on how we can improve every aspect of North Carolina FC for 2022 and I am excited about the future of our club. Our priorities for the upcoming year include an increased investment in our players and team, improved care for our players off the field, increased club communication on all the positive things happening with our players and team, increased interaction with fans and our community, as well as several others. We are actively working towards 2022 and look forward to sharing our progress.

That being said, throughout the season, we had several “firsts” and several positives that have given me a positive perspective to a challenging year.

11 Players Named to USL League One Team of The Week

3 Players Named the USL League One Player of The Week

12 USL League One Save of the Week Nominations, 6 Wins

6 USL League One Save of the Month Nominations

7 USL League One Goal of the Week Nominations

1 USL League One Goal of the Month Nomination

So, THANK YOU to everyone involved.

THANK YOU, PLAYERS. Every day, you all showed up with a strong work ethic and positive attitude, no matter the results or circumstances. Each of you found yourselves in a locker room unlike any of you had seen before – surrounded by youth and inexperience, but with eager ambition and positivity. You all created a special culture that we were fortunate to have. I loved watching each of you develop individually this year and know you’ll all be stronger for facing and enduring challenges together.

Naz, Robby, Pecka, and Malick should be commended on their sacrifices and selflessness to continue to give their all for a club they each love. Jake, Luis, Nelson F., Peter, Josh, Nelson M., Max, Malyk, Shermaine, Thorn, and Daniel should be recognized for their efforts in joining a club in transition and making positive impacts, while all individually continuing their development. Four high-level clubs believed in our club and staff to provide their players minutes and development this year, at various moments of the season. Jay Tee, Damian, Selmir, and Aziel were all big contributors to our team success throughout the season and developed well on their seasons on loan.

All fifteen NCFC Youth Academy players came into the First Team with a desire to compete and learn, and all did well in consistently challenging environments. Nicholas, Britton, and Cole will be known as the players that forever changed the professional pathway for our club and our Academy program.

THANK YOU, FANS. Thank you for your support of our players and team this year. Thank you for voicing your opinions and continuing to hold the club to a high standard. As our club transitioned to a new project and a new look, that brought positives and negatives, and you all celebrated and endured alongside us. Whether it was celebrating a special player’s career coming to an end or celebrating the start of a young career, our players have appreciated every bit of support from start to finish. Many shared celebrations ahead.

THANK YOU, FAMILY. Thank you to my wife, Jill, and to our kids, for your love and support.