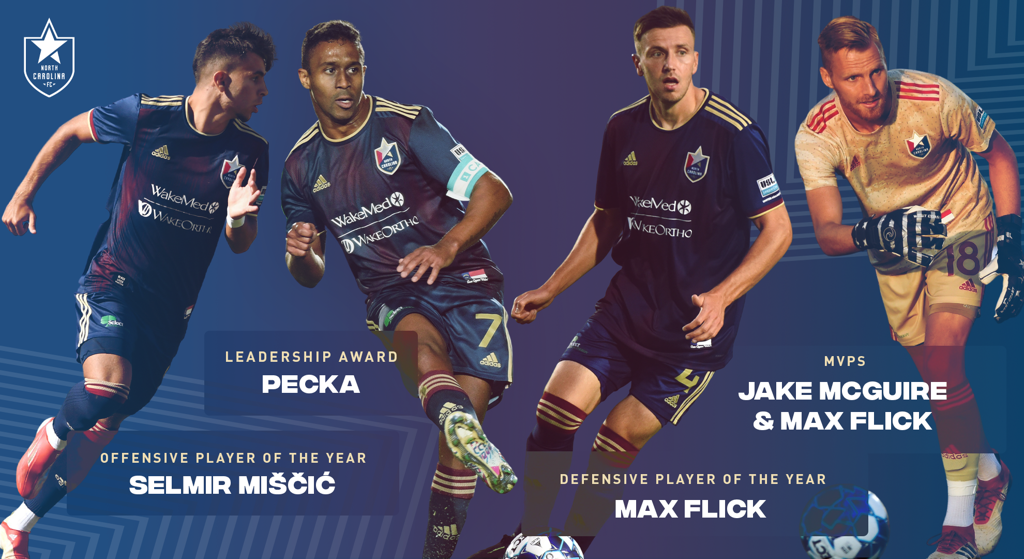 Offensive Player of the Year

Selmir Miscic was selected as the Offensive Player of the Year, having appeared in 25 matches for North Carolina FC this season, clocking 1,423 minutes of playing time, scoring four goals and adding three assists. The Philadelphia Union loanee was a true difference maker in the attacking third for the young squad this year and also earned Team of the Week honors in Week 7 of the season.

“Selmir was a main contributor in our team’s attack and tallied the most goals and assists he’s had in a professional season of his young career.  His creativity and ability to take players on was a positive for our group all year.”

Defensive Player of the Year

Max Flick was selected as the Defensive Player of the Year, and like Miscic, the defender also made 25 appearances throughout the season. Flick started 89% of this year’s matches, assuming an integral role in the North Carolina FC backline, logging 2,202 minutes of playing time and scoring two goals. In Week 12, Flick was named to the USL League One Team of the Week for his role in NCFC’s first win over the Richmond Kickers, in which he scored a goal, completed 81 passes and won seven duels.

“Max was the most consistent presence we had in our backline throughout the season, showing his versatility to play centrally or wide.  He had an excellent first professional season that he’ll certainly be able to build off of.

Pecka earned the Leadership Award, having sported the captain’s band in eleven matches this year and being one of the few veterans on the young North Carolina side. The Brazilian played in 19 matches this season, scoring one goal and playing a versatile role in the midfield, rotating between defensive, offensive, and central midfield.

“We were fortunate to have Pecka and the wealth of experience he brings within our group this season.  He was a leader for us on and off the field and certainly a role model for our young players."

The squad voted on the team’s Most Valuable Player Award, ultimately deciding that the honor would be shared by Max Flick and goalkeeper Jake McGuire. McGuire finished the regular season with seven clean sheets and the third-greatest number of saves in the league (75) in 21 appearances and 1,890 minutes of playing time.

“Jake was one of the top goalkeepers in our league throughout the season and came up with so many big saves over the course of the year.  He also was an exceptional leader and role model for all of our young goalkeepers in our everyday environment.” 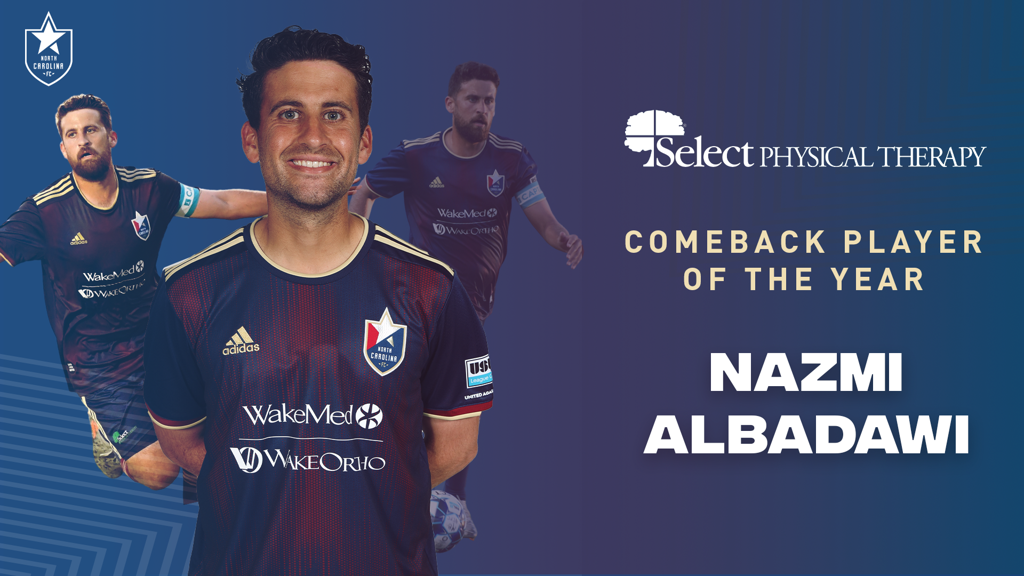 Former North Carolina FC captain Nazmi Albadawi was voted as Select PT’s Comeback Player of the Year. At the beginning of the season, the veteran had a medical emergency following a preseason match against the Charleston Battery, making his return to the lineup in early July. The Raleigh native donned the captain’s band in ten of twelve matches before announcing his retirement in September, leading North Carolina FC to a dominant 4-1 win over New England Revolution II in which he scored a brace in his sendoff game. Albadawi also earned USL League One Team of the Week honors in Week 21, as well as a nod for Player of the Week in Week 23.

“Naz’s character, leadership, and dedication were on full display for our team and club this year.  It was an extremely difficult stretch of our season after Naz suffered from a serious medical emergency at the end of preseason and throughout the time that he was unable to play.  He remained an unbelievable presence in the locker room for our young team and was critical to our team’s success upon his return to play.”