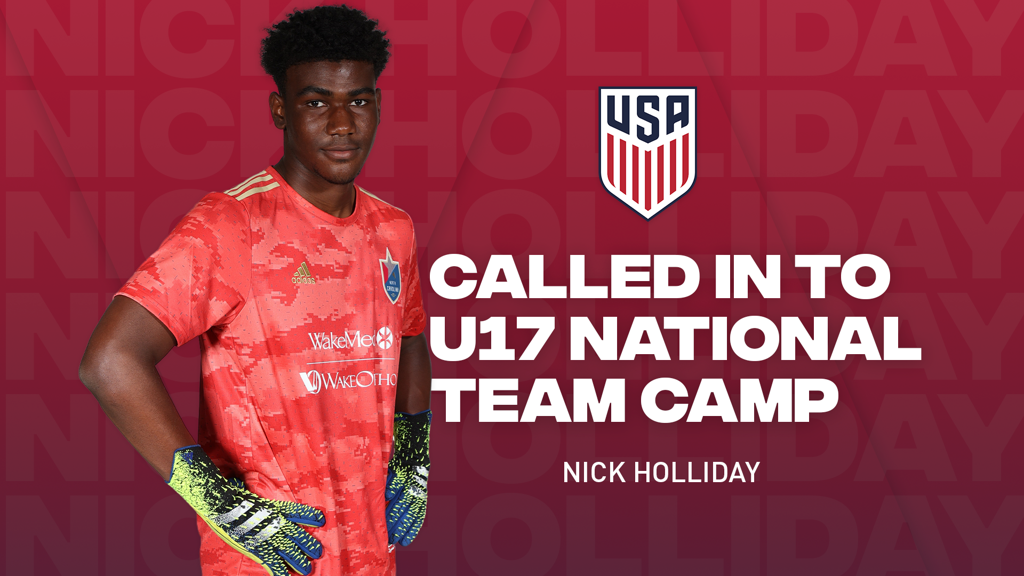 Cary, NC (October 27, 2021) - North Carolina FC goalkeeper and recent signee Nicholas Holliday has been called to the U-17 U.S. Men’s National Team training camp, the club announced today. The camp will be held in Chula Vista, California from November 1-8.

“It feels great to be called into the U-17 National Team camp,” Holliday said. “It’s always been a dream of mine to represent my country and now I’m one step closer. My family, of course, has been a big help, and NCFC has given me a chance to be a professional, which has helped me a lot with my development. I’m really grateful for this opportunity and I’m excited to get started.”

While this will be Holliday’s first National Team training camp, the 15-year-old has experience competing on the national stage. Holliday was selected for the US Soccer’s U14 Boys National Team East Regional Camp in 2019 and 2020, and also participated in US Youth National Team ID Centers in 2019, 2020 and 2021.

In early September of this season, Holliday signed a professional contract with North Carolina FC, his signing marking another significant step as North Carolina FC continues to focus on developing young talent. The NCFC Academy Product has appeared in five matches for the team this season, clocking 450 minutes of playing time. At only 15 years old, Holliday made his professional debut against the Chattanooga Red Wolves, becoming the youngest goalkeeper to start a match in USL League One history.

“I am thrilled for Nick to be invited to the upcoming U17 United States Men’s National Team Camp,” NCFC Head Coach John Bradford said. “Nick has grown tremendously this season in the daily professional environment at North Carolina FC and has absolutely earned the opportunity to be recognized as one of the top goalkeepers in his age group in the United States.  In each professional game that he has played this year, he has shown his quality and potential and I’m sure he’ll make the most of his opportunity at this camp with the U17’s.”

NCFC will play their final match of the season this Saturday, October 30 at home against the Greenville Triumph. The match will kick-off at 7 p.m. ET and tickets can be purchased here.