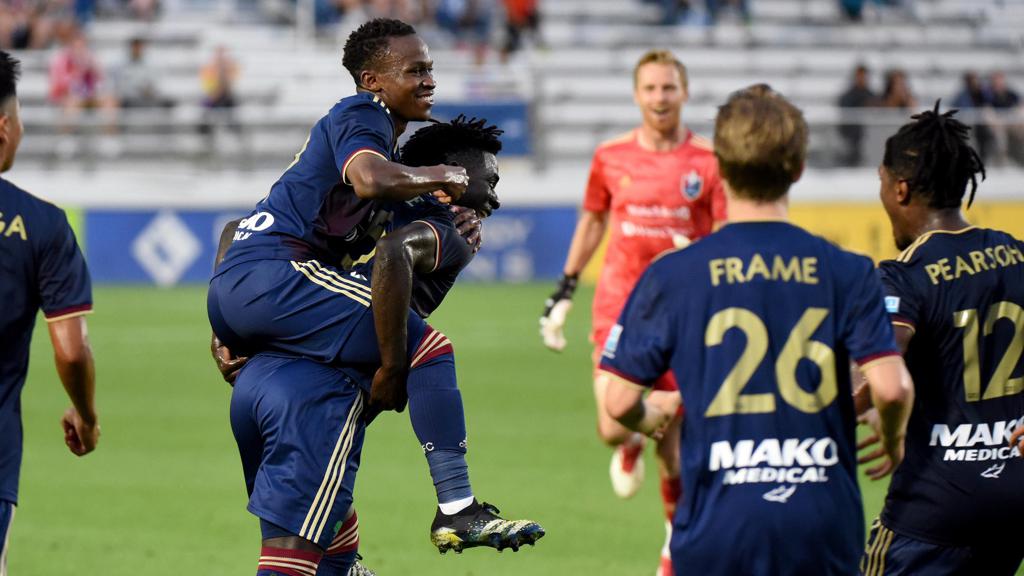 TAMPA, Fla. — USL League One announced on Monday the Team of the Week Presented by Cleer Audio for Week 12 of the 2021 regular season, with North Carolina FC midfielder Jay Tee Kamara named Player of the Week after recording a goal and an assist in the second half of his side’s 2-1 comeback win against the Richmond Kickers on Friday.

With his team trailing by a goal coming out of halftime, the 19-year-old - on loan from the USL Championship’s Louisville City FC - took control of the game. Two minutes into the second half, Kamara whipped in an excellent free kick, which teammate Max Flick headed in for the equalizer. Nine minutes later, Kamara produced a bit of magic to give NCFC the lead, juking his defender to create space before firing an accurate low strike from 20 yards out which snuck inside the post. The performance was key to North Carolina FC picking up its first win as a member of League One.

Here are the other members of the Week 12 Team of the Week presented by Cleer Audio, including NCFC's Max Flick.

GK - Dylan Castanheira, Fort Lauderdale CF: Castanheira made eight saves on Saturday night, providing the platform for his side to claim a 2-1 victory against Toronto FC II courtesy of a late Mitchell Curry goal.

D - Max Flick, North Carolina FC: In addition to scoring NCFC’s equalizer in its 2-1 win over the Richmond Kickers (his second goal in as many games), Flick led all players in the match in both passes completed (81) and duels won (seven).

D - Jiro Barriga Toyama, Forward Madison FC: Though Madison took home just one point from its trip to Greenville, Toyama put up a gaudy stat line for the Flamingos. His fantastic bit of skill earned Madison a penalty kick early in the match, and he put up big numbers in a variety of categories. His tallies of duels won (15), successful tackles (four), fouls drawn (three), and dribbles completed (three) were all game highs.

D - Ryan Spaulding, New England Revolution II: For the second straight week, Spaulding earns a spot on the Team of the Week for contributing at both ends of the pitch. He scored the second goal in New England’s 3-0 win over North Texas in some style, curling a strike to the far post with his right foot. He also chipped in to the clean sheet effort, winning five duels and making seven recoveries to go with three clearances.

M - Jay Tee Kamara, North Carolina FC: In addition to his terrific goal and assist, Kamara led all players in the match against Richmond with three chances created and made two successful tackles.

M - Aaron Molloy, Forward Madison FC: Molloy recorded both of Madison’s goals in its 2-2 draw with Greenville, the first from the penalty spot and the second with a thunderous first-time strike from the edge of the area. The Irishman also completed a game-high 57 passes at an 86 percent success rate.

M - Jake Rozhansky, New England Revolution II: Rozhansky continues to be the engine in the midfield for this Revolution II side. In Saturday’s win, he completed an incredible 79 of his 83 passing attempts - 60 of which were in the opposition half. He also notched a game-high three chances created.

F - Greg Hurst, Union Omaha: Hurst started and finished the excellent move which produced the only goal in Omaha’s 1-0 win over FC Tucson on Saturday night. The Scottish striker did well to release Ferrety Sousa down the right flank, then moved smartly in the box to get on the end of Sousa’s quality cross.

F - Damian Rivera, New England Revolution II: Rivera was a terror when running at the North Texas defense. He converted a penalty kick to get on the scoresheet, as well as completing three dribbles, winning nine duels, and drawing three fouls.