Match Recap: Young NCFC Side Battles on the Road vs. Chattanooga, Fall Short Late in the Match 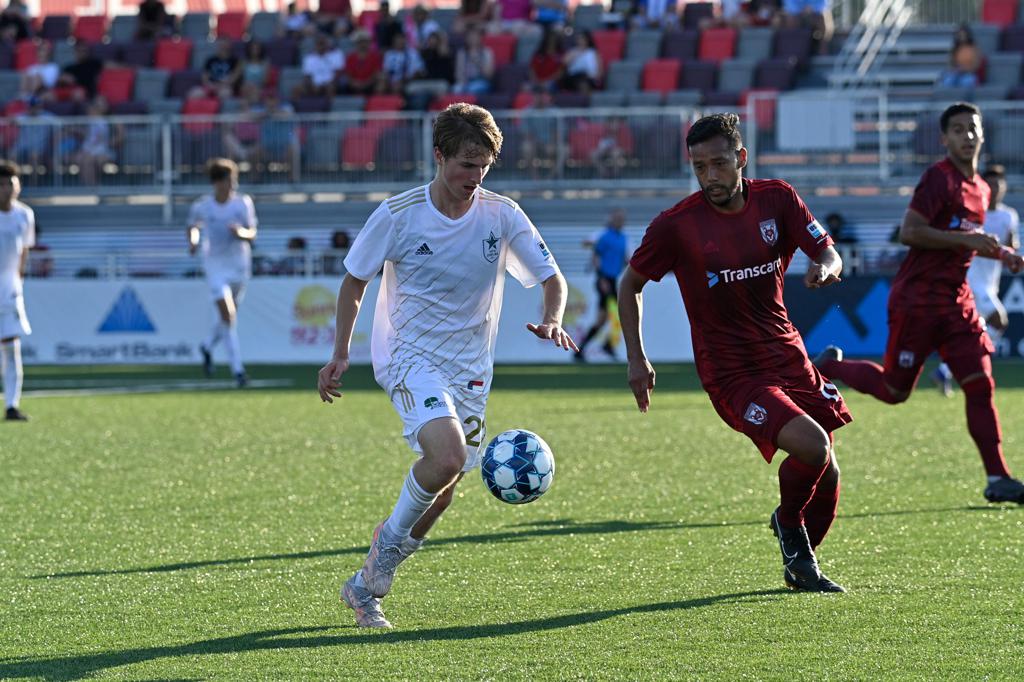 CHATTANOOGA, TN (June 20, 2021) - Despite a hard-fought effort, North Carolina FC fell short of Chattanooga Red Wolves SC in the final minutes of Sunday night’s match, 3-2. With many core veteran members unavailable for the match, the young academy players were put to the test and made an impressive impact from the start. Though the result was not in favor of NCFC, the young squad’s performance showed promise for the future as Cole Frame and Max Flick each added their first goals of the season and NCFC Academy standout Nicholas Holliday earned the nod in net, making his first team debut in tonight’s contest, notching ten total saves.

Holliday created a buzz around the league when he was named to the starting XI as he is just 15 years old. Despite the significant age gap between Holliday and the entirety of the Red Wolves’ roster, the young goalkeeper made five saves through the first half alone, keeping his squad competitive with Chattanooga. He would go on to face 37 shots throughout the match — a USL League One record — 14 of which were on target.

“I was excited to get the start, it’s something that I’ve been dreaming of for a long time,” Holliday shared after the match. “The result was unfortunate but it’s an experience that I’ll learn a lot from and take into my future. I’m just extremely blessed and grateful to be given the opportunity.”

Head coach John Bradford had high praise for Holliday’s efforts saying, “Nick was exceptional tonight and rose to the occasion with quality saves and presence in the goal. There is no replacement for the professional experience that he gained tonight and I was so proud to see him thrive.”

"It means so much to me to get my first start and goal," Cole Frame said following the game. "I’ve spent 12 years growing up through this club and to start a game for NCFC and score is incredible. It felt great to get an early goal, and I want to thank Nick Holliday for playing amazing and keeping it scoreless as long as we did. Unfortunate result but we'll bounce back next week.

Kicking things off early for North Carolina FC, Cole Frame notched his first goal of the season in what was also his starting lineup debut. The 18-year-old is the first NCFC Academy player to score a goal in an official league match, making history for the club. The attack began with Luis Arriaga, who landed a stellar long ball directly into Frame’s path. Frame, who was making a dashing run toward the Chattanooga eighteen, beat the defender on his back to bury a shot into the lower 90 and give NCFC an early advantage, 1-0.

The Red Wolves answered with a goal in the second half, with Mark Hernandez sending a long ball up top to Juan Galindrez. Settling the ball at his feet, Galindrez chipped in a shot to equalize for the Red Wolves, narrowly avoiding Holliday, who abandoned the net in an attempt to make the save. The goal was Galindrez’s third when coming off of the bench.

Galindrez tallied the brace in the 88th minute, when an unfortunate deflection off of an NCFC defender landed in his path inside the six. Galindrez’s goal allowed the Red Wolves to pull ahead late into the match, 2-1.

Chattanooga’s third goal of the match came at the hands of Mark Hernandez and Jackson Dietrich. Taking the ball to the goal line, Dietrich threaded a cross into the NCFC box, finding Hernandez just outside the six. Now in at close range, Hernandez was able to turn on the ball and score his first goal of the season for the Red Wolves, rendering the score 3-1 in the early minutes of stoppage time.

Also scoring his first goal of the season was defender Max Flick, whose opportunity to join the scoresheet began with a set piece. A foul on Collin McCamy provided NCFC with a free kick in the 94th minute, as Luis Arriaga lofted a ball into the Chattanooga box. Chaos ensued, as the ball pinged between several NCFC players Flick was able to find the back of the net with a tactful volley. Nelson Flores was credited with the assist. Despite a fight for an equalizing goal in the final minutes, NCFC fell short of their East Coast opponents as the final whistle blew.

Up Next: North Carolina FC returns to Sahlen’s Stadium at WakeMed Soccer Park for their Pride Night match on Friday, June 25 against the Richmond Kickers at 7 p.m. ET. Tickets can be purchased here.