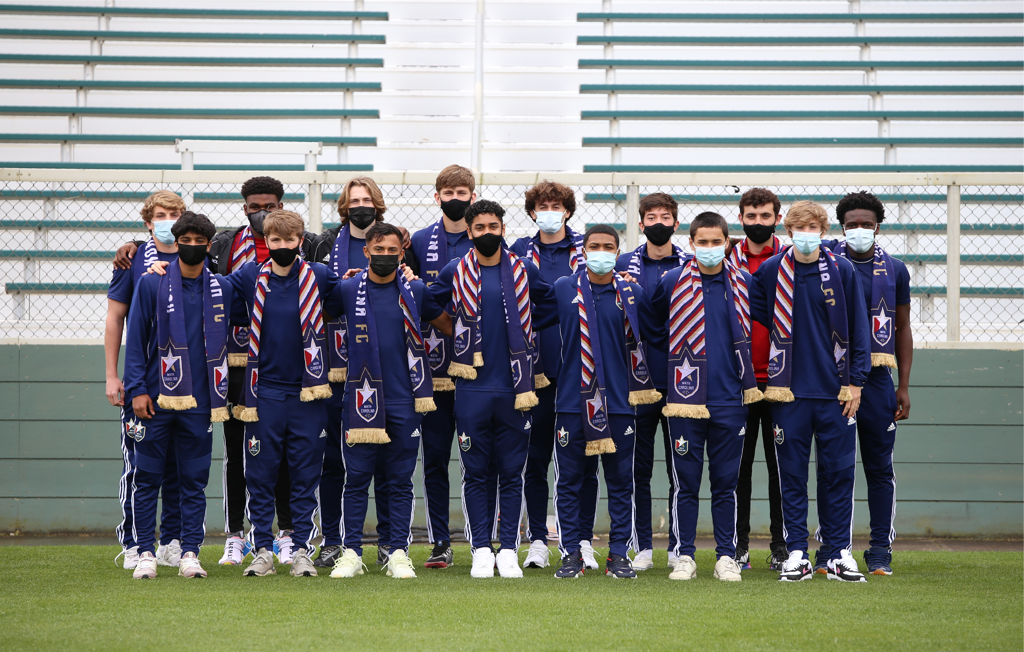 “In January, we made the strategic move to compete in USL League One to build and invest in a clear youth-to-professional player pathway and development model,” said NCFC Head Coach John Bradford. “Today’s signing of 15 youth Academy players marks a key moment for our club, as we take the first of many steps in bringing this vision to life. This landmark signing serves as a message to our community, both locally and nationally, that North Carolina FC is the place to be for professional development. I’m excited to bring this deserving group of academy standouts and our professionals together to build a highly competitive development environment for all.”

Will Buete is a graduate of Crossroads Flex who will be attending NC State in the fall. The midfielder has played for NCFC Youth for seven years, five of which were with the NCFC Academy team.

17-year-old Curtis DeLeon will be signing his academy contract ahead of attending the University of Alabama at Birmingham (UAB). In 2019, the midfielder played with the U17 Trinidad Youth National Team. DeLeon’s older brother, Shane, was one of five players on academy contracts during NCFC’s 2020 season.

“The ability for our incoming players to sign a USL Academy contract is extraordinary,” said UAB Men’s Soccer Head Coach Jeff Kinney. “High-level training with high-level matches for North Carolina FC will only help prepare these players for the next chapter in their playing careers. We are excited that Curtis has earned this opportunity, and we look forward to his growth within the program before coming to us.”

Britton Fischer is a junior at DH Conley in Greenville, NC who has been part of the NCFC Academy for two years. The defender is a past NCFC Hamilton Sportsmanship Award recipient for his sportsmanship shown on and off the field. Fischer competed in the 2018-2019 ECNL National Finals.

The youngest of the group, Nicholas Holliday, signs an academy contract at 15 years old. The goalkeeper also signed an academy contract in 2020, training with the first team for a good portion of the season. Just a freshman in high school, Holliday has been a member of NCFC Youth for three years.

Cole Frame, a senior at Crossroads Flex, has logged 12 years at NCFC Youth, including five years with the NCFC Academy. Frame is a 2019 SuperCup NI Globe Champion as well as a 2016 US Youth Soccer National Champion.

Midfielder Drew Kerr will sign an academy contract following five years as a player for the NCFC Academy. The sophomore is excited for the opportunity to learn alongside the other academy players:

“I’m excited to learn and grow in this professional environment and to play alongside other ambitious players on a daily basis,” said Kerr. “I am grateful for this opportunity and look forward to working with the NCFC coaches and players.”

Marvin Mariche brings youth national team experience with him as he signs an academy contract with North Carolina FC. In 2018, Mariche was called up to the U15 US Youth National Team camp. The sophomore in high school has played for the NCFC Academy for three years.

Nata Martinez is a midfielder and has been a player for NCFC Academy for the past three years. Martinez recently graduated from Jordan High School. He signs an academy contract alongside the 14 other academy players.

Midfielder Collin McCamy signs an academy contract for the second consecutive year. McCamy trained with the first team during the 2020 season. He graduated from Crossroads Flex and will be attending West Point in the fall. While the 2020 season gave him great experience, McCamy feels this year will provide more on-field opportunities. “It is very exciting," McCamy said. "I had the chance last year to sign, but now I feel there is more opportunity to make a big impact on the field.”

“Exciting times ahead for Collin at the USL professional level as he continues to grow towards his potential ability and versatility,” said Army Men’s Soccer Head Coach Russell Payne. “His experiences with NCFC have had the most positive impact on his development, and we are looking forward to watching him continue on his path this spring with the USL Academy team. He will be in an optimal high-performance environment that will prepare him to make an impact at both the college and professional level.”

Aaron Messer adds leadership to NCFC as he brings his experience as captain of the U17 and U19 NCFC Academy teams. The midfielder is committed to play at the University of Pennsylvania:

“Being able to develop homegrown talent through your system is a trademark of a strong organization,” said University of Pennsylvania Men’s Soccer Head Coach Brian Gill. “I think it is highly commendable by NCFC to provide Aaron and the rest of these players the opportunity to experience the game at the pro level with their boyhood club. I hope it will be something that will educate as much as it will motivate them about the next step in their process.”

UNC commit Parker O’Ferral is looking forward to developing his game with NCFC as he prepares for the beginning of his collegiate career in the fall of 2022. O’Ferral has played for NCFC Youth for 11 years, four of which were with the NCFC Academy. He was named to the 2018-2019 ECNL Mid-Atlantic All-Conference Team:

"Signing with the first team allows me to continue my development by providing me the chance to play with and learn from more experienced players,” said O’Ferral. “This invaluable opportunity will also help to prepare me to play at UNC in the fall of 2022.”

Forward Yekeson Subah, a junior a Rolesville High School who is committed to play collegiately at UNC, has been playing for the NCFC Academy for five years:

“I just want to say thank you to the coaches for this amazing opportunity,” said Subah. “I also want to give thanks to my family, friends and teammates for always pushing me to be the best me and always motivating me to work hard every day. It’s been an honor to represent this club at an academy level, and it’s going to be an honor to represent NCFC at a professional level because it’s always been a dream of mine to play professional soccer.”

Samuel Terranova will have the opportunity to learn from recent NCFC signee Jake McGuire at the goalkeeper position. The junior in high school attends Terry Sanford High School and has been a member of the NCFC Academy for five years.

Forward Rohit Thakur signs his academy contract after three years as a member of the NCFC Academy. Thakur has an impressive resume including EECNL Mid-Atlantic Conference Best XI and Player of the Year.

Caden Tolentino joins the NCFC first team following five years with the NCFC Academy. He brings leadership to the team as the captain of the U15 and U17 academy teams. Tolentino is a midfielder who is committed to play at NC State.