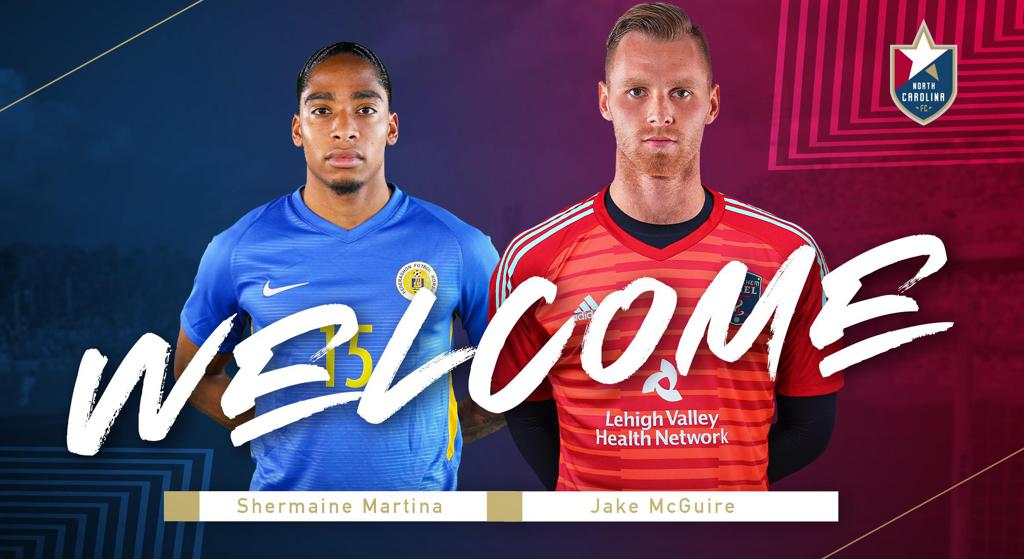 A Curacao international, Martina has experience representing his country at the senior team level. He made his debut in 2018 and has two caps under his belt. Martina started playing professionally in 2015 for MVV Maastricht a team that plays in the Eerste Divisie, the second-highest tier of soccer in the Netherlands. From 2015-2020, the midfielder made 95 appearances for MVV.

“Shermaine is a great addition to our North Carolina FC roster for this season,” said NCFC head coach John Bradford. “Shermaine has international experience and will continue earning valuable caps with their senior team. I look forward to him being a major contributor to our team’s success.”

McGuire is an experienced goalkeeper who was selected 30th overall in the 2017 MLS SuperDraft. He signed with the Philadelphia Union in 2017 but spent most of the season on-loan with Bethlehem Steel. Between 2017 and 2018, McGuire made 43 appearances. He holds the Bethlehem Steel record for saves, shutouts, wins, minutes, and games played. Following his time with Birmingham, McGuire played for Gefle IF, competing in the Division1 Norra in Sweden. In 2020, he spent time with Orebro SK.

“I’m extremely excited to welcome Jake McGuire into our group this season,” said Bradford. “With MLS, USL, and European matches under his belt, he brings great experience as a goalkeeper.  He’ll be a strong presence in the goal for us and extremely important to our backline. I’m looking forward to working with Jake this year.”

The goalkeeper attended the University of Tulsa where he made 67 appearances in four seasons. He holds the school record in shutouts with 17. He was a member of the U17 and U20 United States National teams.