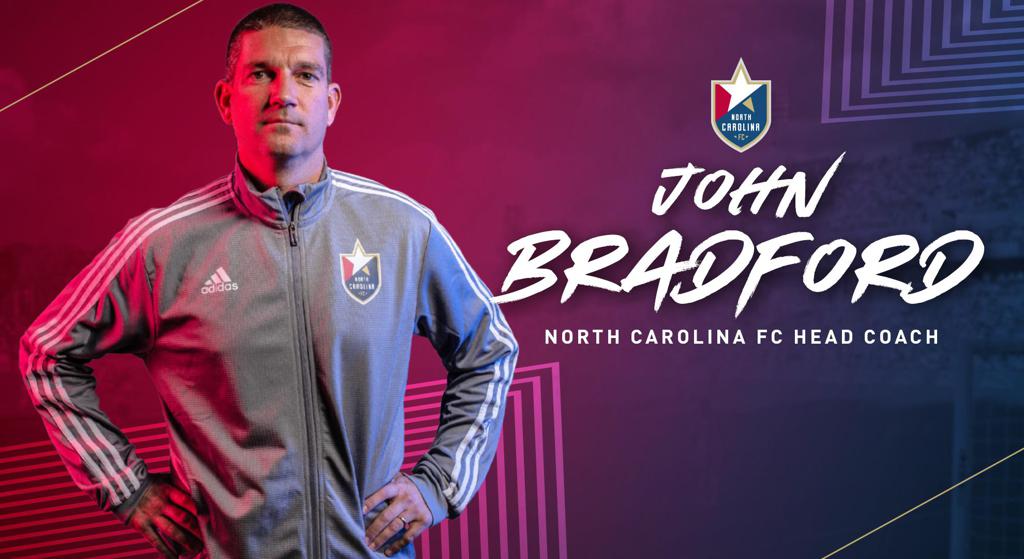 Cary, NC (January 19, 2021)- John Bradford has been named the head coach of North Carolina FC as the team starts a new chapter focused on youth development in 2021. Bradford was an assistant coach under Dave Sarachan during the 2019 and 2020 USL Championship seasons and serves as the Academy Director for NCFC Youth as well as the technical director of NCFC’s U-23 team. Mike McGinty has been named the team’s assistant coach and Nic Platter will continue in his role as Assistant General Manager.

“John has been a key leader in our club for well over a decade and has been an integral part of building the youth-pro development pathway locally and nationally,” said Curt Johnson, President and General Manager of the North Carolina Football Club. “His track record is impressive, and it is fitting that with additional resources focused on retaining, attracting, developing, and promoting some of the best young players in the country that he be the person to lead us.”

Bradford has been the link between North Carolina FC and NCFC Youth for the past two seasons as the assistant coach for the professional team. Entering his 15th year with NCFC Youth (formerly CASL), he provides invaluable insight into the club’s top youth players, whom he will continue to develop as the head coach on the professional side.

Since Bradford took over as Academy Director in 2013, NCFC Youth Academy has had 34 different players called into US Youth National Team Camps, 23 players sign Amateur contracts with the NCFC first team, 10 sign professional contracts domestically and internationally, and over 120 commit to play at the collegiate level. In 2020, NCFC’s squad featured eleven current or former Academy standouts including DJ Taylor, Dre Fortune, Manny Perez, Caleb Duvernay, Conor Donovan, Luke Hille, Adam Armour, Shane DeLeon, Trace Alphin, Collin McCamy, and Nicholas Holliday. Bradford has also been instrumental in the development of players on the USL League Two U23 side, including Jeremy Kelly, who was recently selected in the 2020 MLS SuperDraft by the Colorado Rapids.

From 2016 to 2018, Bradford was an assistant coach with the US U16 and U17 Youth National Teams and was named the US Soccer Development Academy U18 Coach of the Year in 2016. Bradford played collegiately at Furman University, after a youth career where he represented the United States at the U14-U18 ages and was named an NSCAA All-American in 1995 and 1996.

“I am excited to be a part of this next transition of our club,” said Bradford. “Our staff and players will look forward to earning the support of our fans and community with an exciting and competitive style of play balanced with providing opportunities for our deserving younger players.  I’m focused on helping our ambitious, passionate young men make the leap into the professional environment.”

McGinty returns to the team as an assistant coach after coaching alongside Bradford under Sarachan during the 2020 season. Prior to his time with NCFC, McGinty served as goalkeeping coach with the U.S. at the 2019 FIFA U-17 World Cup and head coach at Saint Louis University from 2010 to 2017. After starring at Wake Forest from 1991-94, the former All-ACC goalkeeper embarked on an eight-year professional career that included stints with the Greensboro Dynamo (1995-96), Richmond Kickers (1997-01), and D.C. United (2002). Platter enters his 11th season with the club and his third as Assistant General Manager of NCFC.

Bradford and McGinty will coach North Carolina FC in the team’s first season in USL League One. As announced on January 10, the shift provides the largest youth to-professional soccer organization in the United States the opportunity to enhance its youth development pathway. NCFC will additionally aim to attract the country’s top young players into the club’s development pathway through enhanced scouting and recruitment.