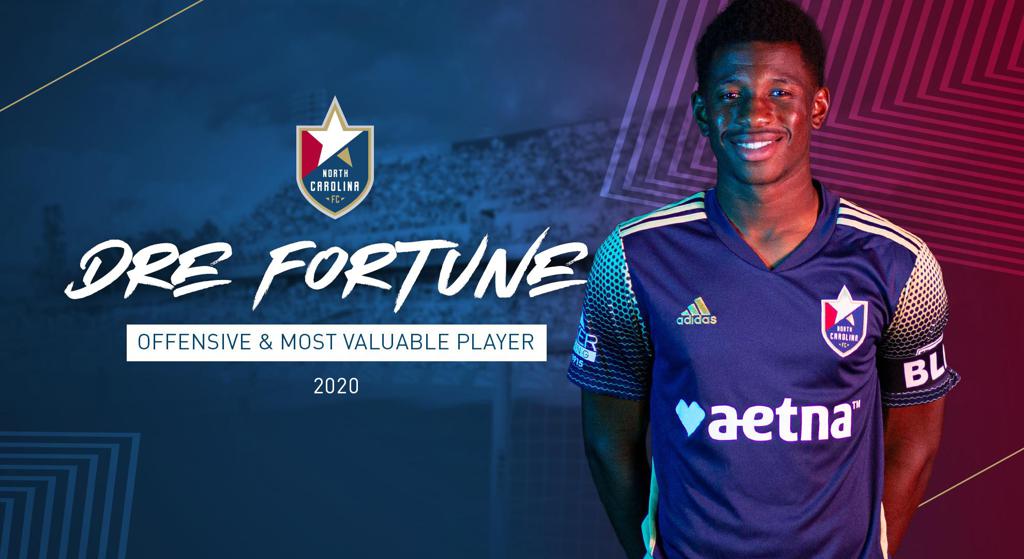 Dre Fortune was selected by his teammates as the Offensive Player of the Year and the Most Valuable Player. Fortune has continued to grow and evolve as a player since 2017 where he became the first North Carolina FC Youth academy player to sign a contract with the first team. This season he led NCFC in scoring with six goals, which was equal to 35% of the team’s total goals. The midfielder had a 100% conversion rate on penalty kicks, scoring three of his goals from the mark.

“It is an honor to be named the team Offensive Player of the Year and the team MVP,” said Fortune. “This club means a lot to me as it has provided the platform for me to grow into the player I am today. In a year of many ups and downs, a tremendous amount of credit goes to the support of my family, the fans, my teammates, and the staff. Thank you to everyone whose hard work went into making the 2020 season a safe possibility for us.”

Fortune had 19 shots throughout 14 matches and 971 minutes. His distribution was also key to North Carolina FC’s game plan as he was second behind teammate Ben Speas in chances created. He touted an 89.4% overall passing accuracy over 568 passes. In his own half, Fortune had an astonishing 96.8% passing accuracy, leading the team. This is Fortune’s first time winning Offensive Player of the Year and MVP.

Conor Donovan was awarded the Defensive Player of the Year in his first season with North Carolina FC since his days as a North Carolina FC Youth Academy player. Donovan started and played every minute of the 14 games played after the USL restart in July. The center back led the North Carolina FC backline and also caused havoc on set pieces. He scored his first goal for NCFC on a corner kick header against Memphis 901 on September 13.

Nazmi Albadawi was given the Leadership Award in his third season captaining North Carolina FC. The midfielder leads both on and off the field as one of the club’s all-time greats. On the field, Albadawi moved up the ranks in the all-time record books in games started and minutes played in 2020. He ranks fourth in club history with 27 goals and continues to be the all-time assist leader for North Carolina FC. He made his 150th appearance with the club on

For his recovery from a nerve contusion in his foot in July, Albadawi was named the Select PT Comeback Player of the Year. After sitting out two matches due to the contusion, the team captain returned to the pitch better than ever. Both of Albadawi’s goals in 2020 came after his recovery. The Select PT staff and athletic trainers were there with #10 through his entire recovery process to ensure his safe return to the game.

A true homegrown player that has been with the North Carolina Football Club for nearly the entirety of his career, Albadawi’s leadership in the community showed as he did numerous virtual appearances with youth players during the break in soccer due to the pandemic. He also exemplifies leadership as he is a member of the North Carolina Football Club’s Diversity, Equity, and Inclusion Task Force. This is Albadawi’s first Leadership Award with the club. The midfielder was named the Offensive Player of the Year in 2017 and team MVP and Offensive Player of the Year for the Carolina RailHawks in 2016.

Graham Smith was named the recipient of the Community Service Award for 2020. Smith kickstarted a campaign where he and his teammates sent videos of themselves reading children’s books to local non-profit Read and Feed. The books chosen included stories of diversity and inclusion that were sent to children who may not have the resources to read at home. Smith also participated in Sponsor To-Go Week in April by visiting local restaurant partners who were in need during the difficult first months of the pandemic. The North Carolina Football Club is proud to present the award to Smith for his contribution to the club’s community-driven initiatives. 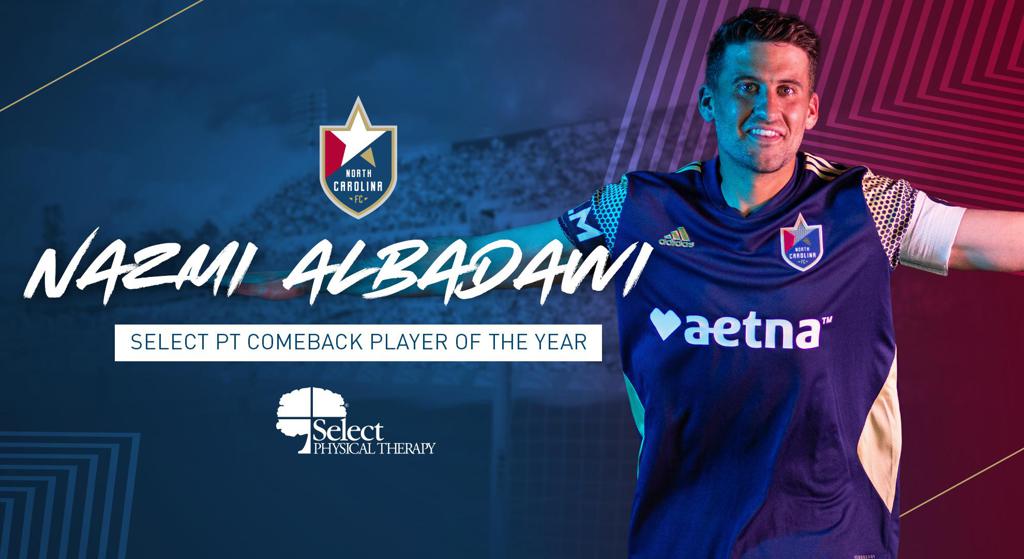 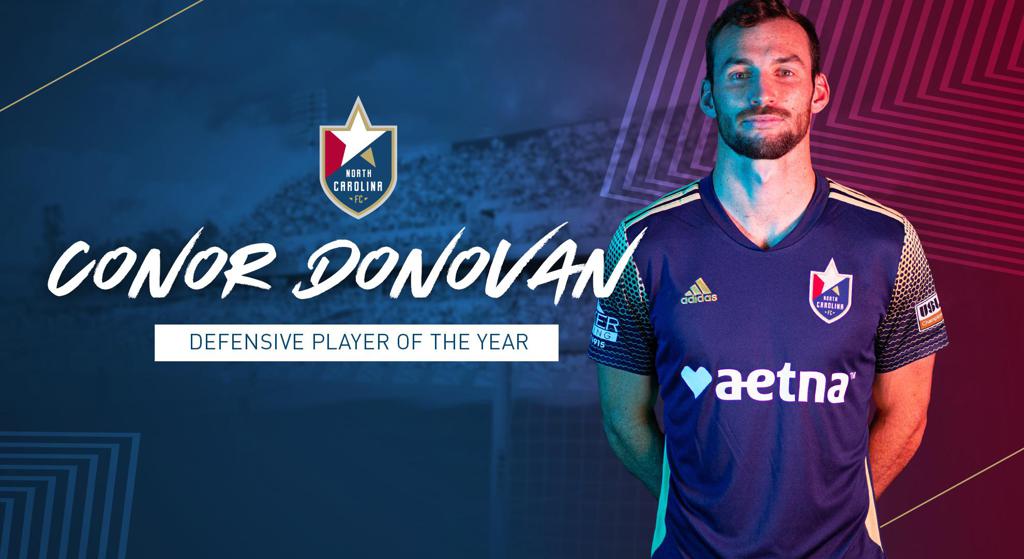 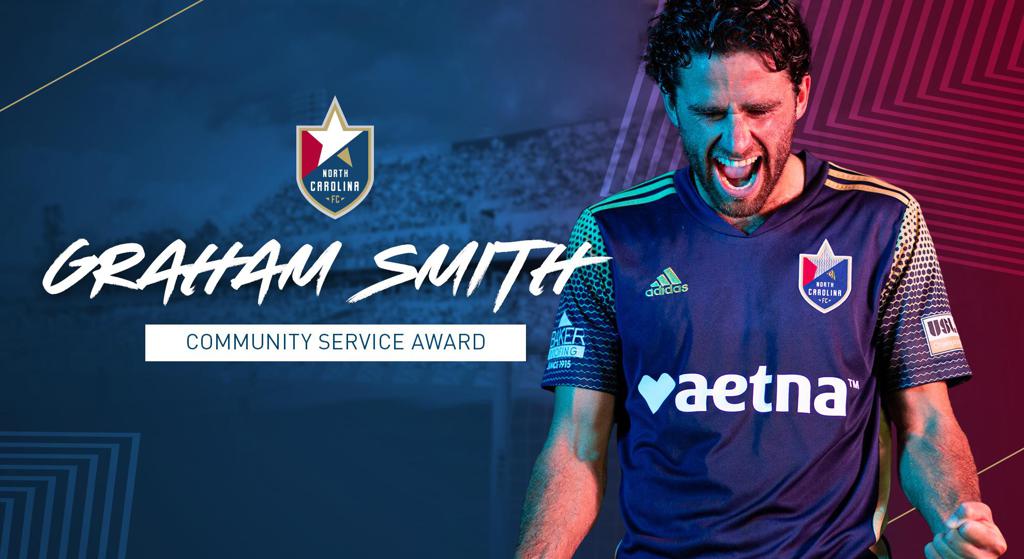