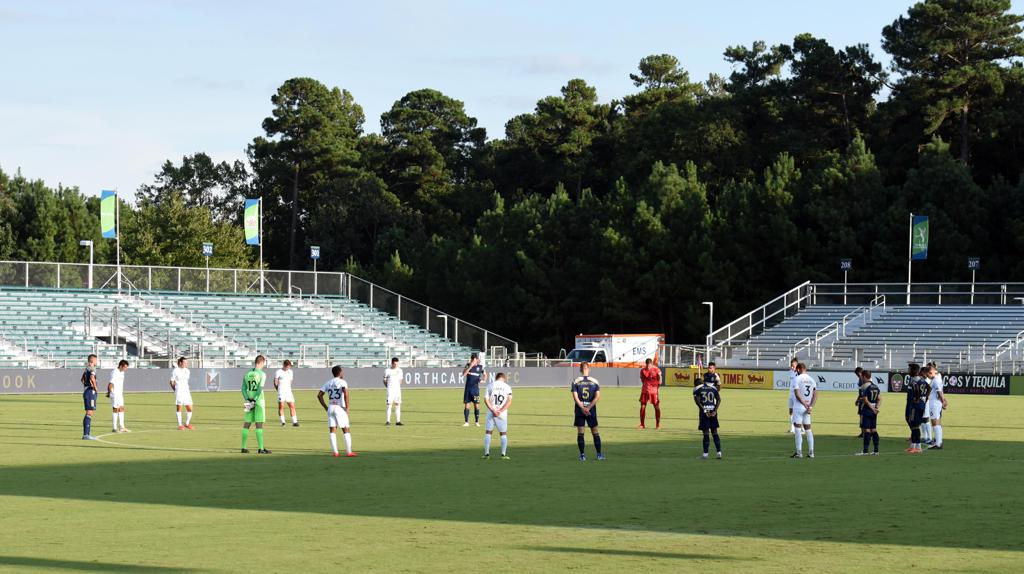 Cary, NC (October 6, 2020)- The North Carolina Football Club announced today the formation of Diversity, Equity, and Inclusion task force with the intent to apply immediate action to the Club’s Black Lives Matter statement and to build a better forum for collaboration on community initiatives for years to come. The task force is made up of members of North Carolina FC, NC Courage, NCFC Youth, and team supporter groups.

“The North Carolina Football Club is made up of people from diverse backgrounds that are all united by a love of soccer and community,” said President and General Manager Curt Johnson. “It is more important than ever that we share insight and ideas internally and use our voice, partnerships, and resources to make positive change as we work daily to be more diverse, equitable, and inclusive.  I am thrilled that we have formed this taskforce and am optimistic that it will help guide the Club for years to come.”

The task force assembled for the first time on September 21 in an open forum setting where all members shared their background and reasoning for joining the task force. The dialogue from the meeting will become action items for the task force and the club in the future.

“I’m someone who believes no matter who you are, you are a human being and you deserve the same rights, equality, and opportunity as everyone else,” said NC Courage forward Lynn Williams. “I’m excited that we have developed a task force and hopefully it will be turned into giving back to the community in long-lasting ways. If I look back at my playing career and all I did was play soccer and didn’t help people, then I would say my career was a failure, so I’m very excited to be a part of something that is bigger than me and soccer.”

The collective group will combine and leverage each other’s resources, experience, and unique perspectives to support and grow initiatives like the Bucy Field Development project, which includes the construction of five mini-pitches that will make soccer more accessible to youth across the Triangle. Task force member Ashlie Bucy is the President of The Bucy Foundation, which prepares young North Carolinians for a changing world.

“Having access to playing fields means having access to one of life’s great classrooms,” said Bucy. “Play time and the opportunity to grow from this sport should be accessible to all people, regardless of race, gender, or socioeconomic background.”

North Carolina FC Youth will be represented on the task force by Marlow Campbell who works in Club Partnerships and Development for NCFCY. NCFC Youth welcomes more than 13,000 players through programs available to youth of all ages and abilities. Programs are offered throughout the Triangle including Raleigh, Cary, Apex, Morrisville, Durham, Chapel Hill, Garner, Wake Forest, Holly Springs, and Fuquay Varina.

"I am pleased and motivated to be a part of this task force,” said Campbell. “Hopefully, we can create a pathway of understanding, growth, and awareness that will lead to better opportunities for all and will make a positive impact in the community that lasts for generations.”

Former North Carolina FC Youth Academy player DJ Taylor is another member of the task force. Taylor’s clothing brand DJKT Apparel has collaborated with the North Carolina Football Club to create a BLM t-shirt. All proceeds from t-shirt sales will be donated to the BLM Global Network Foundation. T-shirts can be purchased here. Taylor, Dre Fortune, and NCFC captain, Nazmi Albadawi, wore the shirts as they traveled to the final away matches in 2020.

“It’s an honor to be a part of this task force that the North Carolina Football Club has put together,” said Albadawi. “Everyone has the same goal and vision of making a real difference in the community and to promote equality. I’m looking forward to the tangible changes we can make to help make our club and our community better.”

The North Carolina Football Club has the support of a diverse and passionate fanbase including the Oak City Supporters, the Renegados, and the Uproar. Members of the supporters groups were included in the task force to provide a stronger bridge and dialog between the organization and the community.

"We strongly believe it is all our responsibility to actively push for more diverse spaces that better reflect our diverse communities,” said the Uproar and the Oak City Supporters in a combined statement. “We not only hold ourselves and our respective supporters groups to this but our club as well. We will continue to use our platform and speak up to support those who haven't traditionally been able to utilize their platform for change."