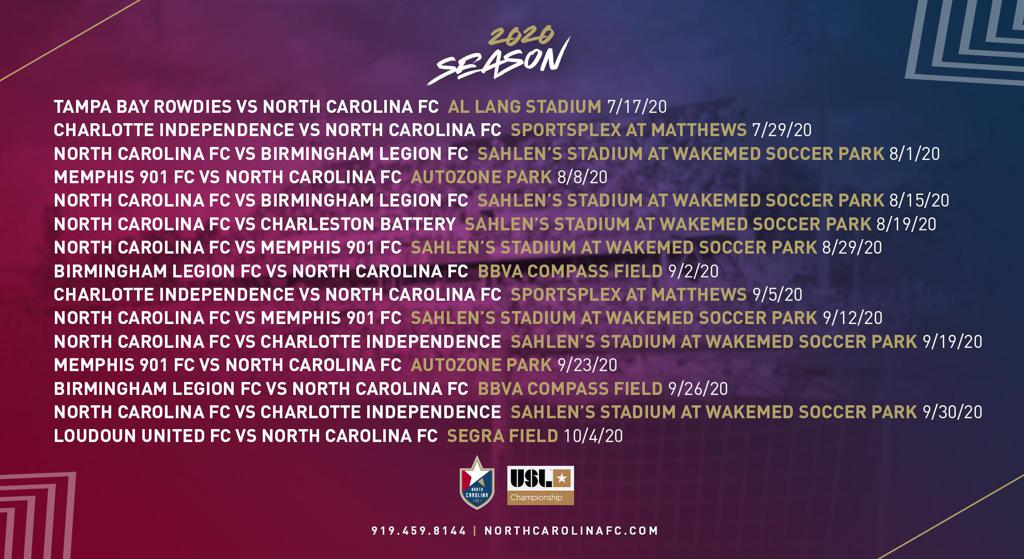 Cary, NC (July 2, 2020)- The USL announced today the schedule for North Carolina FC as the team returns to play in Group G of the Eastern Conference. North Carolina FC is set to play 15 games between July 17 and October 4 to complete their 16 game season that began in March before coming to a halt due to COVID-19. Seven matches will be played at Sahlen’s Stadium at WakeMed Soccer Park.

The North Carolina Football Club is working with local and state officials to determine the feasibility of welcoming fans back to Sahlen’s Stadium. The Club will communicate further information as it is received and will provide options for season ticket holders, groups, and individuals who have purchased tickets to games that have been rescheduled for dates in the near future.

“We are very much looking forward to the resumption of our season,” said North Carolina FC head coach Dave Sarachan. “The 15 games that we have scheduled will give us a very good test of where we are as a team. Our focus is to compete and be successful as a group.”

North Carolina FC will take on the Tampa Bay Rowdies on July 17 in their first game of the new schedule at Al Lang Stadium in Tampa. The game will broadcast on ESPN2 at 7 p.m. ET.

NCFC is scheduled to play four games against Birmingham Legion FC, Memphis 901, and the Charlotte Independence, all members of Group G. Their schedule also includes a match against the Charleston Battery and Loudon United FC. North Carolina FC’s season opener in March against Louisville City FC plus the 15 games current schedule will make up the 16 games in NCFC overall record for the 2020 season.

“It’s been a long long time since our last game against Lousiville,” said NCFC captain Nazmi Albadawi. “We’re eager to get the season going and get some positive results.”