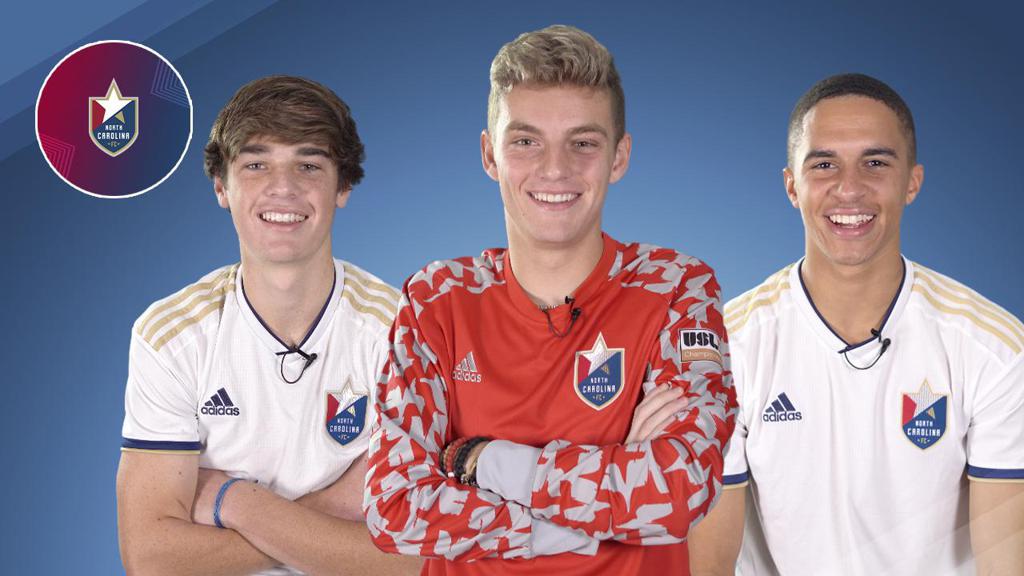 CARY, N.C. (Jan. 23, 2020) – North Carolina FC youngsters Adam Armour, Trace Alphin and Luke Hille are Europe-bound for training opportunities on the other side of the Atlantic. The three NCFC Youth Academy U18-19 teammates recently signed Academy contracts with NCFC ahead of the 2020 USL Championship, allowing them to train and play in first-team matches while maintaining their collegiate eligibility.

Alphin and Hille began training today with Danish club FC Helsingør, which occupies the top spot in the Danish 2nd Division. Both players will be available for selection in exhibition matches against FA 2000 on Saturday and Swedish club Hoganas BK on Feb. 1.

Armour, who has 19 caps with the U.S. U-17 National Team, will train with a pair of 2.Bundesliga sides in Germany, first practicing with FC Nürnberg from Feb. 1-8 before linking up with FC St. Pauli from Feb. 9-16.

John Bradford, the director of the NCFC Youth Academy and an NCFC assistant coach, views the experience abroad as crucial for each player’s development.

“We are excited for these three young men to challenge themselves in these professional environments in Europe,” Bradford said. “They will see what it is like to be in first-team settings in Denmark and Germany. Certainly their opportunities and experiences at home with our first team and academy program at NCFC have prepared them to represent themselves and the club well.”

Alphin, a 17-year-old goalkeeper, was part of both the NCFC first team and NCFC U-23 squad in 2019. The Wake Forest University commit was named to NCFC head coach Dave Sarachan’s matchday squad three times, twice in USL Championship action and once in the Lamar Hunt U.S. Open Cup against New York City FC. The 16-year-old Hille is a goalscoring midfielder, who became the 19th player all-time from the NCFC Youth Academy to sign a contract with the NCFC first team when doing so last week.

Armour, one of the most talented youth defenders in the country, is committed to Duke University and recently played for the U.S. at the 2019 FIFA U-17 World Cup in Brazil. Like Alphin, Armour was a part of both the NCFC first team and NCFC U-23 in 2019.

In Bradford’s view, Alphin, Hille and Armour’s opportunity to practice their craft in professional, European setups is the latest example of the NCFC Youth Academy’s mission to provide the best experiences for its players – wherever that might be.

“Compared to many other professional clubs with youth components, we are open to pushing our players into various professional environments, not just our own first team,” Bradford said. “We are excited to improve and increase the support of our players’ professional ambitions and our community can expect to see many more stories like this in the future.”

In the last five years, the NCFC Youth Academy has had 33 players called into youth national team camps, nine sign professional contracts with MLS clubs and over 100 commit to play at the college level. Three players from the 2019 NCFC U-23 squad were recently selected in the 2020 MLS SuperDraft, including first-round selection Jeremy Kelly, a product of the NCFC Youth Academy and the NCFC first team.

"The player pathway can take various looks in our club," Bradford said. "It can incorporate opportunities with our first team or international professional opportunities, as well  as college soccer environments and even others   It’s important for us to forecast and provide these opportunities for each individual player."

NCFC opens up its 2020 campaign at home against Louisville City FC on Saturday, March 7 at 2:30 p.m. at Sahlen’s Stadium at WakeMed Soccer Park. Single-game tickets for the 2020 season will go on sale on Feb. 3.