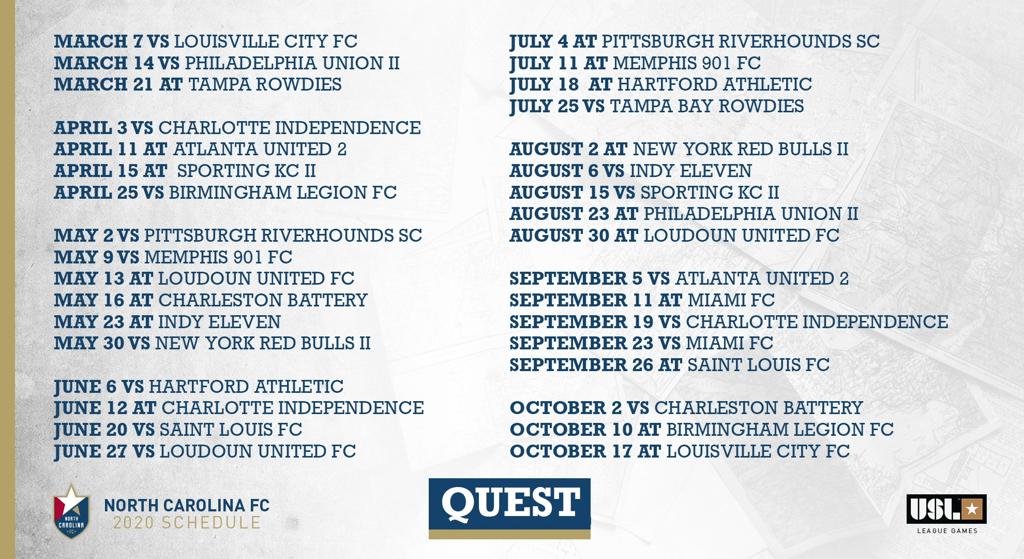 Download the 2020 North Carolina FC schedule to your calendar

CARY, N.C. (Jan. 9, 2020) – North Carolina FC unveiled the entirety of its 2020 USL Championship schedule on Thursday, as the club will play 34 games over the course of a regular season that spans 224 days from March through October.

The match is the first of 17 home games and one of two in the month of March, as NCFC will also host Philadelphia Union II on Saturday, March 14 at 2:30 p.m.

NCFC’s first away game of the season comes on March 21, as it travels to face the Tampa Bay Rowdies at Al Lang Stadium, where it recorded a 3-1 win last season.

As revealed on Wednesday, two NCFC matches will be broadcast nationally as part of the USL’s rights agreement with ESPN. On Friday, April 3, NCFC’s home game against rival Charlotte Independence will air on ESPN Deportes at 7 p.m.

NCFC’s regular-season home finale, a Friday night tilt against the Charleston Battery on Oct. 2, will be televised on ESPNews with a 7 p.m. kickoff. The last time NCFC played on ESPNews, it defeated the Tampa Bay Rowdies 4-2 in August 2019.

Outside of its first two matches of the season and its two nationally televised games, start times for NCFC's other 30 matches are to be determined.

With an odd number of teams in the Eastern Conference in 2020, NCFC will play two opponents three times: Charlotte Independence and Loudoun United.

Meanwhile, NCFC will face second-year USL Championship club Loudoun United on the road twice and once at home. NCFC’s first trip to the D.C. United-affiliated club comes on Wednesday, May 13. Sarachan’s team then hosts Loudoun United on Saturday, June 27, before once again visiting Loudoun on Sunday, Aug. 30.

NCFC’s longest homestand of the season comes in late April and early May, as the team will host Birmingham Legion FC on April 25, Pittsburgh Riverhounds SC on May 2 and Memphis 901 FC on May 9. Additionally, four of NCFC’s five games between May 30-June 27 come at home (5/30 vs. New York Red Bulls II; 6/6 vs. Hartford Athletic; 6/20 vs. Saint Louis FC; and 6/27 vs. Loudoun United).

NCFC closes out the regular season with the reverse fixture of its opener, as it travels to take on Lou City in the newly completed Lynn Family Stadium on Oct. 17.

The 2020 USL Championship Final to conclude the league’s 10th anniversary season will be held between November 12-16 and aired on an ESPN broadcast network.

Season tickets for North Carolina FC’s 2020 season are on sale now. Click here to learn more about season tickets or call the Coastal Credit Union Box Office at 919-459-8144 to speak with a ticket representative.