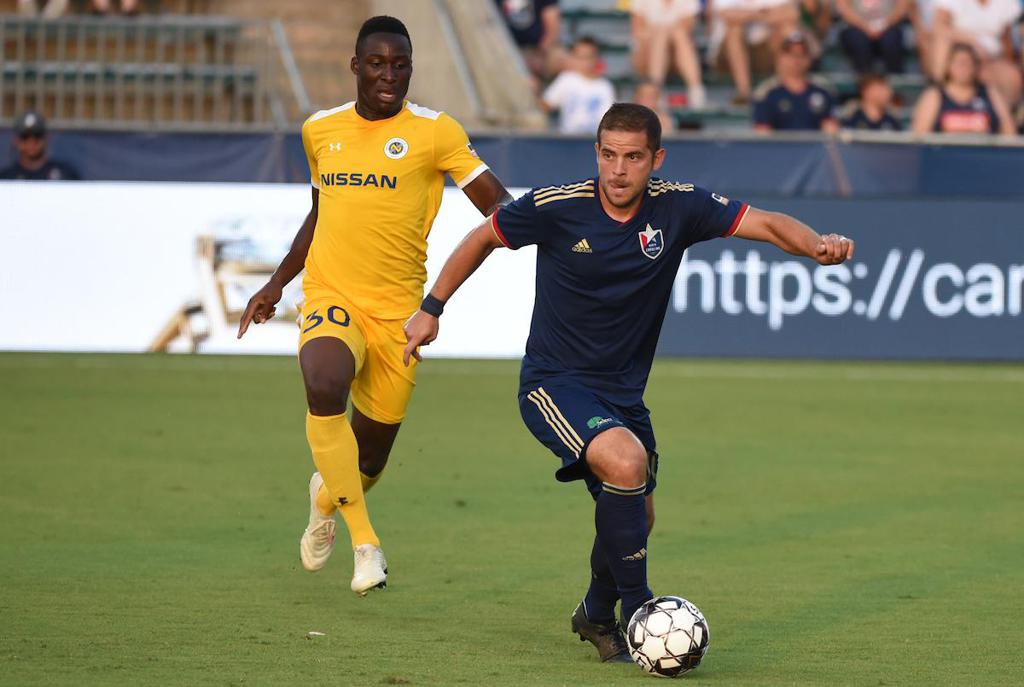 CARY, N.C. (Oct. 11, 2019) – North Carolina FC takes a two-game winning streak into its final road match of the regular season, as it travels to face Nashville SC at Nissan Stadium on Saturday at 8:00 p.m. ET.

Head coach Dave Sarachan’s team, which has already clinched a spot in the USL Championship Playoffs, took full advantage of its recent run of home games, winning 3-1 against Ottawa Fury FC and 2-0 against New York Red Bulls II. NCFC (15W-9L-8D, 53 points) holds seventh place in the Eastern Conference, but is only one point behind sixth-place Louisville City FC.

Saturday’s match represents a chance for NCFC to both earn a season sweep of second-place Nashville (18W-7L-7D, 61 points) and once again illustrate how dangerous it can be against the conference’s top sides. In nine games against the teams ranked Nos. 1-5 in the Eastern Conference (Pittsburgh Riverhounds SC, Nashville, Indy Eleven, New York Red Bulls II, Tampa Bay Rowdies), NCFC is 6W-2L-1D.

The last time NCFC visited the Volunteer State, it nabbed a 2-1 win at Memphis 901 FC in August, and it will be hoping for a similar result on Saturday. When NCFC and Nashville most recently met in Cary on June 29, a goal by midfielder Ben Speas gave NCFC a 1-0 win, as goalkeeper Alex Tambakis earned his fifth clean sheet of the season.

With five goals scored over its past two matches, NCFC’s attack enters Saturday’s showdown in fine form. As a team, NCFC’s 56 goals in 2019 are tied for the third-most in the Eastern Conference. The way Sarachan’s group has gone about finding the back of the net is unique compared to other teams in the USL Championship, however. Through matches played on Oct. 9, NCFC is the only team in the league to have five players with six-plus goals. Midfielder Steven Miller leads with nine goals – and also has a team-best six assists – but forwards Donovan Ewolo and Robbie Kristo aren’t far behind with eight tallies apiece.

Nashville is led in scoring by Daniel Rios, a familiar name to NCFC fans. One year after notching 20 goals for NCFC while on loan from Chivas Guadalajara, the Mexican forward has found the back of the net a team-high 18 times for Nashville. But in its latest game, Nashville used a goal from a less-common source of offensive production to secure a 2-1 win over Louisville on Tuesday. With nothing separating the two teams, a 92nd-minute header by defender Jimmy Ockford, just his second goal of the year, won the match for Nashville.

Facing the highest-scoring offense in the Eastern Conference, NCFC flipped the script and earned a 2-0 win over New York Red Bulls II last Saturday at Sahlen’s Stadium at WakeMed Soccer Park for the team’s 10th victory at home this season. Goals by forwards Donovan Ewolo and Robbie Kristo proved to be enough for NCFC, as head coach Dave Sarachan’s team earned its ninth clean sheet of 2019.

A strong start helped NCFC grab an early lead, as midfielder Manny Perez drew a penalty in the sixth minute. One minute later, Ewolo saw his kick from the spot saved but he collected the rebound for his eighth goal of the year. When Ewolo was forced to depart due to an injury later on in the first half, Kristo came on in replacement and continued his good run of form, scoring in the 50th minute. The goal was his fourth in NCFC’s last five home matches. Reliable in goal, NCFC’s Alex Tambakis matched his season-high with six saves in the victory.

North Carolina FC – #33 Aaron Guillen
The versatile defender, formerly of FC Dallas, has been a steady presence at the back for NCFC, starting in 29 games this season. Capable of playing both center back and outside back, Guillen can be slotted anywhere along the backline but has primarily played at left back this season. In NCFC’s 1-0 win against Nashville in June, Guillen recorded his first assist of the season.

Nashville SC – #14 Daniel Rios
NCFC is understandably familiar with Nashville’s leading scorer and knows how important slowing him down is. When Rios scores, Nashville is 11W-2L-2D. When Rios doesn’t score, Nashville is 5W-4L-5D.

NCFC returns home for its regular-season finale as it hosts Saint Louis FC on Saturday, Oct. 19, at 7:00 p.m. ET for Fan Appreciation and Hamilton Night. The club will also honor the career of captain Austin da Luz, who is retiring following the season. For tickets and information please visit www.NorthCarolinaFC.com or call the Coastal Credit Union Box Office at 919-459-8144.