The New State of Soccer

On December 6, 2016,  Owner Steve Malik and President and General Manager Curt Johnson ushered in a New State of Soccer by announcing several initiatives bolstered by a bold new brand with a modern vision for soccer in the Triangle and North Carolina. The initiatives center around bringing the highest level of men’s and women’s professional soccer in North America to the Triangle.

“This is a brand restatement,” said North Carolina FC Owner Steve Malik. “We aspire to be at the top level of both men’s and women’s professional soccer, so we are pursuing MLS and NWSL bids as well as a new stadium. We made a conscious decision to brand ourselves as North Carolina’s professional club. A united soccer community will be one of the keys to reaching these goals.”

In conjunction with this brand repositioning, the Carolina RailHawks were renamed North Carolina Football Club (referred to as North Carolina FC or NCFC), and have a new crest and colors, which were revealed at the event.

The new crest features several elements that tie North Carolina’s rich culture and history together. The white five-point star sits at the peak of NCFC’s crest and is a symbol of the star on the North Carolina state flag. The star embodies North Carolina as a whole, and represents the state’s admission as the 12th US state. The lower right point of the NCFC star representing the Triangle area geographical shape stands alone to place emphasis on the club’s location. “FC,” the acronym for football club, lies between two airplane wings as an ode to North Carolina’s slogan: “First in Flight.” Additionally, the primary crest colors “Atlantic Blue” and “Cardinal Red” are inspired by the state flag and complemented by “Southern Gold,” a nod to the legendary accomplishments of North Carolina’s athletes throughout the years.

“We wanted a crest that embodied the symbols that are synonymous with the state of North Carolina,” said North Carolina FC President and General Manager Curt Johnson. “The star, the triangle, the wings and the colors are all nods to the state’s rich culture and tradition.”

Malik also announced an aggressive public campaign to be awarded an MLS franchise within the next 12-18 months. This desire comes after discussions with MLS executives over the last 12 months, as well as a market study which reinforced that the Triangle would be a successful MLS Market.

In addition, Malik stated he is planning to accelerate efforts to finalize a location and begin construction on a new 20,000+ seat stadium within the next year. The location and renderings will be unveiled in 2017.

“We feel we are well positioned for this,” Malik continued. “The market is ready for an MLS team based on our geographical location, population growth, dynamic economic environment and significant soccer participation. MLS requires a minimum of 20,000 seats with amenities in order to maximize revenue, and a new stadium is vital to our plans as it would increase the economic impact in the area and allow us to better showcase the sport.”

Since taking over the team, Malik has advocated for a multi-team organization. To that effect, he also announced his desire to be awarded a first-division National Women’s Soccer League (NWSL) team to the Triangle in the next three to six months.

“We have seen tremendous success in North Carolina with women’s soccer,” Malik said. “The numerous accomplishments of local college programs, paired with the continued success of the USWNT, have driven interest in women’s youth programs. We feel the time is right to bring the highest level of women’s professional soccer to the Triangle.”

Lastly, North Carolina FC will be launching an exciting membership program to enlist widespread support from all segments of the community – individual, corporate, and governmental – to help aggressively drive the successful execution of the above initiatives.

“There is tremendous value to the membership program,” Johnson concluded. “Aside from allowing members to secure their priority spot for MLS and NWSL seats at a new stadium, it gives supporters the opportunity to impact the process. The best way soccer enthusiasts, supporters, fans and corporations can help us achieve our goals and be a part of this movement is by becoming season ticket members, sponsors and members of our organization. They would be putting their name and money behind growing the fan base, as well as being a part of the growth of the sport and these historic initiatives.”

North Carolina FC’s membership program is available to all fans of the club. Memberships are included with all season ticket plans or can be purchased separately by individuals for $49. Some of the membership benefits include priority preference on seat selection for a new MLS stadium and NWSL franchise, the ability to provide input and vote on items that directly impact the fan experience on game day, and the opportunity for each season ticket member to select three special game day experiences throughout the season. 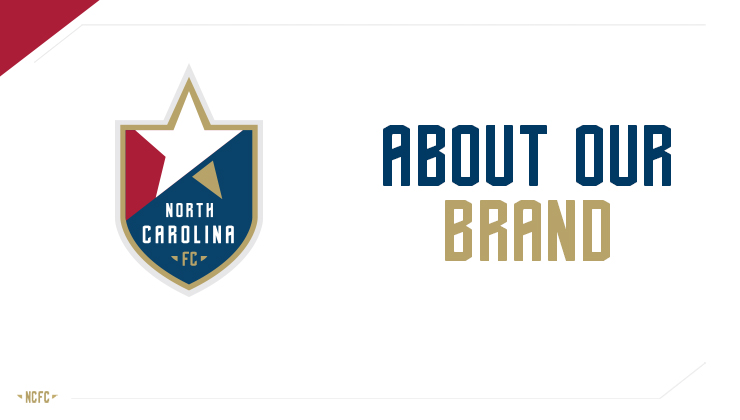 The North Carolina FC logo draws inspiration from the state’s impressive history that has made a lasting impact on the nation and world. With colors that align with those of our state and our country, NCFC is proud to wear the crest and solidify its identity as the club of North Carolina.

The white five-point star sits at the peak of NCFC’s crest and is a stark symbol of the star on the North Carolina state flag. The star embodies North Carolina as a whole and represents the state’s admission as the 12th US state. Each point comes together to form a united team and club.

The lower right point of the NCFC star, in the shape of the geographical Triangle area, stands alone to place emphasis on the club’s location. The Triangle is the well-known central region of North Carolina anchored by the cities of Raleigh, Durham and Chapel Hill which are home to North Carolina State University, Duke University and the University of North Carolina respectively. The club’s world-class training facility and stadium are at the pristine WakeMed Soccer Park, located in the heart of the Triangle in Cary, NC. The Research Triangle Park is embedded in a thriving community of ideas, innovation, and growth. NCFC is proud to call the Triangle home.

The “FC” acronym lies between two airplane wings as an ode to North Carolina’s motto: “First in Flight.” Brothers Wilbur and Orville Wright invented and flew the first successful airplane, the Flyer, from atop of Kill Devil Hill in Kitty Hawk, NC in 1903. Their revolutionary innovation is a staple in the state’s rich history as the event is commemorated on the North Carolina license plate. The Wright Brother’s fortitude, determination and triumph are qualities that are instilled in NCFC’s philosophy and vision.

Representing loyalty and stability, the crest’s predominant color, Atlantic Blue, lays the framework of the NCFC logo. Known for its iconic lighthouses, the North Carolina coast meets with the Atlantic Ocean for over 300 miles. Blue is one of the two official state colors and is the vertical field on the left of the state flag.

Southern Gold encircles the NCFC crest and is concentrated within the lower right point of the star and airplane wings. The color honors the state’s history of abundant gold resources and athletic excellence. The discovery of a 17-pound gold nugget in Cabarrus County, NC sparked the North Carolina gold rush in 1799, boosting the state’s enterprise into the 19th century.

Gold is also a nod to the state’s legacy of superiority in soccer and other sports alike. From Michael Jordan to Mia Hamm, North Carolina is home to some of the world’s greatest athletes of all time, making the Old North State a true southern treasure.

The crest’s shield resembles the shape of an acorn, representing the club’s allegiance to the state’s capital affectionately known as the City of Oaks because of the oak-lined streets in the heart of Raleigh. As the seed of the deep-rooted oak tree, the acorn symbolizes the growth and ambition that NCFC possesses.

From Peak to Point:

The top point of the five-point star creates a peak that epitomizes the state’s vast mountainous region. With the highest mountain peaks east of the Rockies in the Appalachian Mountains, to the state’s seven world-renowned coastal lighthouses, North Carolina is a state that is diverse, unique and unparalleled.