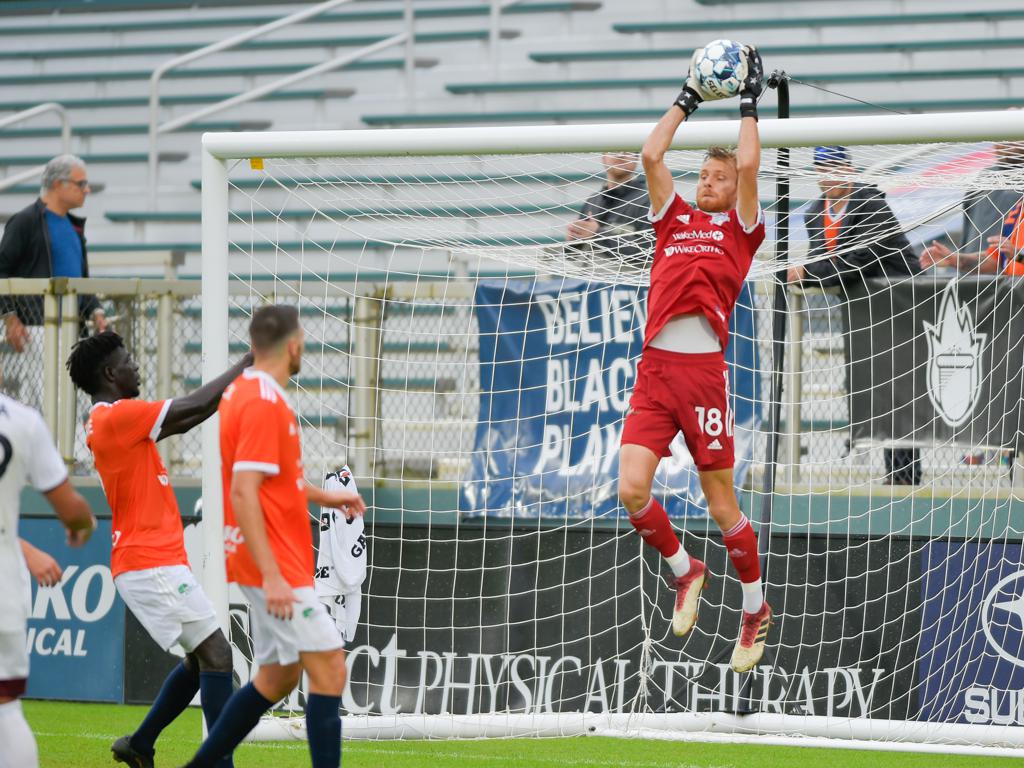 CARY, NC (October 9, 2021) — North Carolina FC fell short of the Chattanooga Red Wolves in a high-scoring tilt that saw five goals scored amongst the two sides. Pecka and Aziel Jackson each picked up a goal during the match, and Jonathan Ricketts, Jorge Luna, and Mark Hernandez tallied the goals for Chattanooga. Though the result was not in favor of the home side, the match featured an impressive penalty save from Jake McGuire and a stellar performance from Aziel Jackson, who added a goal and an assist on the night.

North Carolina FC broke the ice in the 14th minute, capitalizing early in the match on a corner kick taken by Jackson. The kick found Pecka at the far post, and the captain buried a volley on his first touch to collect his first goal of the season and give North Carolina FC the 1-0 advantage over the visitors. Jonathan Ricketts brought the Red Wolves level late in the half, as Chattanooga also put away a goal catalyzed by a corner kick. As the half drew to a close, the score remained knotted at 1-1.

Mere minutes into the second half, Luis Arriaga tapped a short pass to Aziel Jackson inside the Chattanooga box, setting the Minnesota United loanee up for a scoring chance at close range. Maintaining his composure in the final third, Jackson netted his first goal for the club to pull North Carolina FC ahead of the Red Wolves, 2-1. Later, in the 54th minute, Jorge Luna equalized for Chattanooga, deadlocking the score at two goals apiece.

Mark Hernandez would be the difference maker for the Red Wolves in tonight’s contest, entering the match as a substitute and bagging the game-winner on his first touch of the match. A North Carolina FC penalty in the box offered the visitors a chance to double their lead by way of a PK, but the opportunity was denied with a diving save by NCFC goalkeeper Jake McGuire. As the final minutes of the match ticked away, North Carolina FC worked desperately for a game-tying goal, but to no avail as time expired and the Red Wolves picked up three points on the road. The young North Carolina side will look to bounce back on the road against FC Tucson next Wednesday.

Saturday night’s contest marked the celebration of the first inaugural RailHawks Throwback Night, in which the North Carolina FC side sported RailHawks uniforms and RailHawks merchandise was available for sale. At the conclusion of the match, several former players, including Nazmi Albadawi, received special recognition for their role in building professional soccer in the Triangle area.

Up Next: North Carolina FC will travel to face FC Tucson on Wednesday, October 13 at Kino North Stadium in Tucson, AZ at 10 p.m. ET. The match will air live on ESPN+.