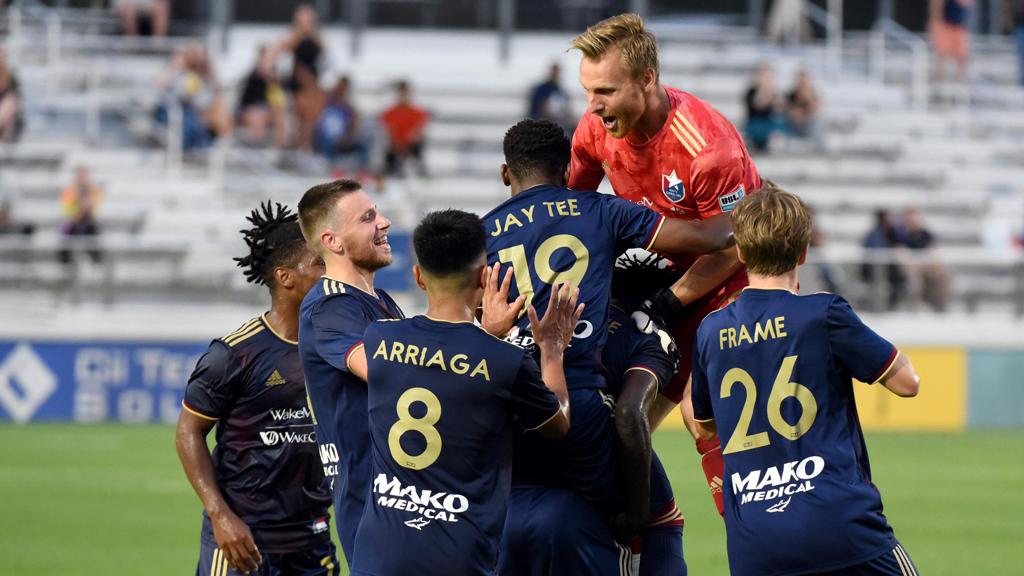 “The locker room feels and sounds a little different tonight,” shared head coach John Bradford following the match. “To finally see out a lead and get three points means everything to this group and I couldn’t be happier for them. Our full club project was on display tonight with all professional and academy players giving everything they had to the game. The immediate response in the second half was everything. So happy for this group, and now we have to build on this going forward.”

Max Flick shared Bradford’s sentiments, saying, “It was an incredible feeling to help the team with a goal and get a win for the fans at home. Now we re-focus and prepare to get another three points next weekend at Tormenta.”

The Kickers added the first goal of the match, as an initial scoring attempt from a Richmond player ricocheted off of the crossbar and into a swarm of players from both sides. Chaos in the box ensued, as an NCFC defender was able to clear the ball out of the six. Unfortunately for the home squad, the clearance was intercepted inside the eighteen and played back in by Ivan Magalhaes, who found the head of Emiliano Terzaghi. The cross found Terzaghi in at close range, as the midfielder flicked in a header to give Richmond a 1-0 lead in the 6th minute.

North Carolina FC answered with an equalizer early into the second half, the opportunity arising as NCFC was awarded a free kick for a foul on Cole Frame. Jay Tee Kamara took the kick, lofting a near-perfect ball into the Richmond box. Beating several defenders in an aerial duel, Max Flick buried a header past Richmond goalkeeper Akira Fitzpatrick to deadlock the match at a goal apiece. Flick’s goal was his second in two games, as the defender also tallied a goal in NCFC’s most recent contest against the Chattanooga Red Wolves.

Giving NCFC the lead in the 56th minute was Jay Tee Kamara, who bodied a clearance from the Richmond defense just outside of the eighteen. Cutting the ball to his right foot and back to his left in a swift motion, Kamara beat his defender and rocketed a dazzling shot into the lower ninety to give the home side a 2-1 lead. The game-winner was Kamara's second of the season, lifting North Carolina to their first win of the season in front of their home crowd.

- Jay Tee Kamara and Max Flick each added their second goal of the season.

Up Next: North Carolina FC will travel to face Tormenta FC for the first time this season on Saturday, July 3 at Erk Russell Park in Statesboro, Georgia at 8 p.m. ET.