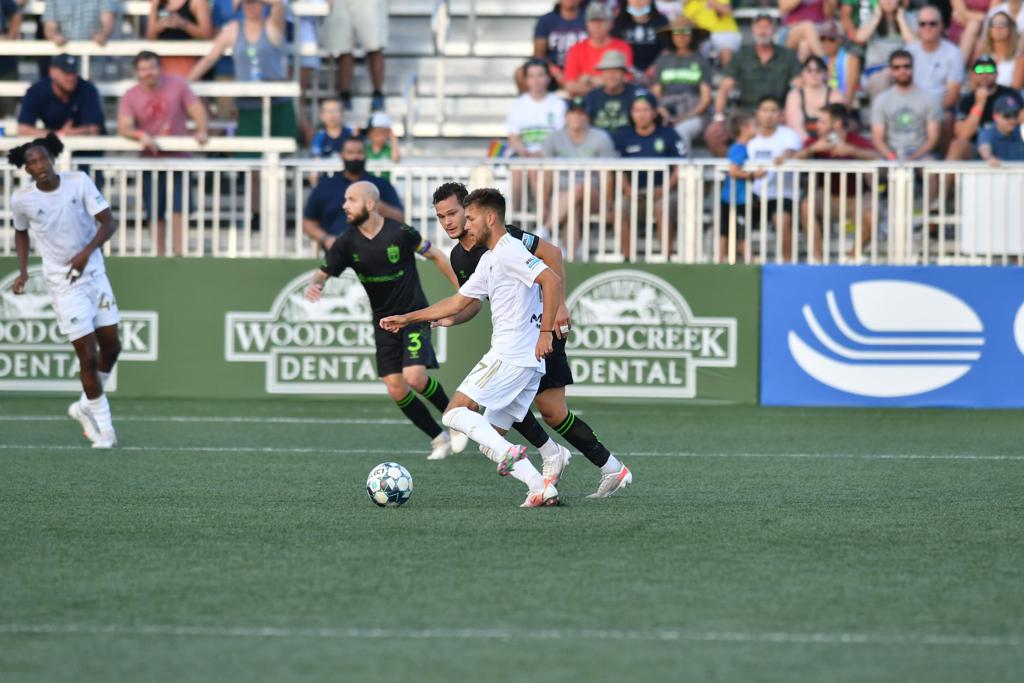 GREENVILLE, SC (June 16, 2021) - North Carolina FC came up just short of last year’s League One champions, the Greenville Triumph, 2-1 in Wednesday night’s contest at Legacy Early College in Greenville, SC. Though the result was not what the young squad wanted, it was a night of firsts — 17-year-old NCFC Academy product Britton Fischer made his starting lineup debut, Jay Tee Kamara scored his first goal of the season, and seven NCFC Academy players were listed on the 18-man roster. Don Smart and Marios Lomis added a goal apiece for the Triumph.

Jay Tee Kamara’s goal also marked NCFC’s third goal of the season scored within the first fifteen minutes of the match, the most of any team in League One.

"There were many positives tonight, in a game where critical details were the difference.  I felt we were the better team in the first half and our young group took it directly at the defending league champions on their home field.  We certainly have to continue to improve on taking our chances.  When the club made a decision to move towards building the first team in connection with our academy program, we knew that there would certainly be highs and lows with undertaking that mission."

On Britton Fischer's start and performance:

"To have Britton Fischer be the first NCFC Academy player to start a professional match was a major milestone for him and for our club.  Our entire group had confidence in him and I thought he performed extremely well in a challenging road environment against a top opponent.  He will certainly take this experience and continue his upward trajectory."

On Jay Tee's goal:
"It was great to see Jay Tee finally get a goal, as it’s certainly a quality he has that had just not been translating to the game.  We certainly need to have him and others find their scoring form."

On his team debut:

"I thought it was a great opportunity and I am very grateful to get the chance to start. Tough result but I feel like we are just getting closer and closer each week but overall felt great to be out on the pitch.”

Jay Tee Kamara notched his first goal of the season in the early minutes of tonight’s match, taking advantage of a long ball sent upfield by NCFC goalkeeper Jake McGuire. Greenville’s mishandling of the pass allowed Kamara to settle the ball at his feet, accelerating to beat a defender and advance into the Triumph box. Burying a shot into the lower 90, Kamara bagged the first goal of the match to give NCFC a 1-0 lead despite debate amongst the referees as to whether or not the goal was offside.

Greenville responded with a goal of their own in the 27th minute, as Marios Lomis threaded a through ball to Don Smart, who redirected a shot on goal with his first touch. North Carolina FC goalkeeper Jake McGuire charged Smart inside the eighteen, making himself big enough to get a foot on the attempt, but to no avail as the Triumph equalized, deadlocking the score at a goal apiece.

After ending the half tied 1-1, each side entered the match raring for a go-ahead goal. A give-and-go inside the North Carolina FC box presented Greenville with their opportunity to gain the upper hand, as Marios Lomis played a pass to Max Hemmings who was able to slot the ball back into Lomis’ path. Now at close range, Lomis scored his sixth goal of the season to give the Triumph a 2-1 lead in the early minutes of the second half.

Up Next: North Carolina FC will continue their stint on the road as they take on the Chattanooga Red Wolves on Sunday, June 20 at 7 p.m. ET at CHI Memorial Stadium in Chattanooga, Tennessee.  The team returns home for their Pride Night match on Friday, June 25 against the Richmond Kickers at 7 p.m. ET. Tickets can be purchased here.