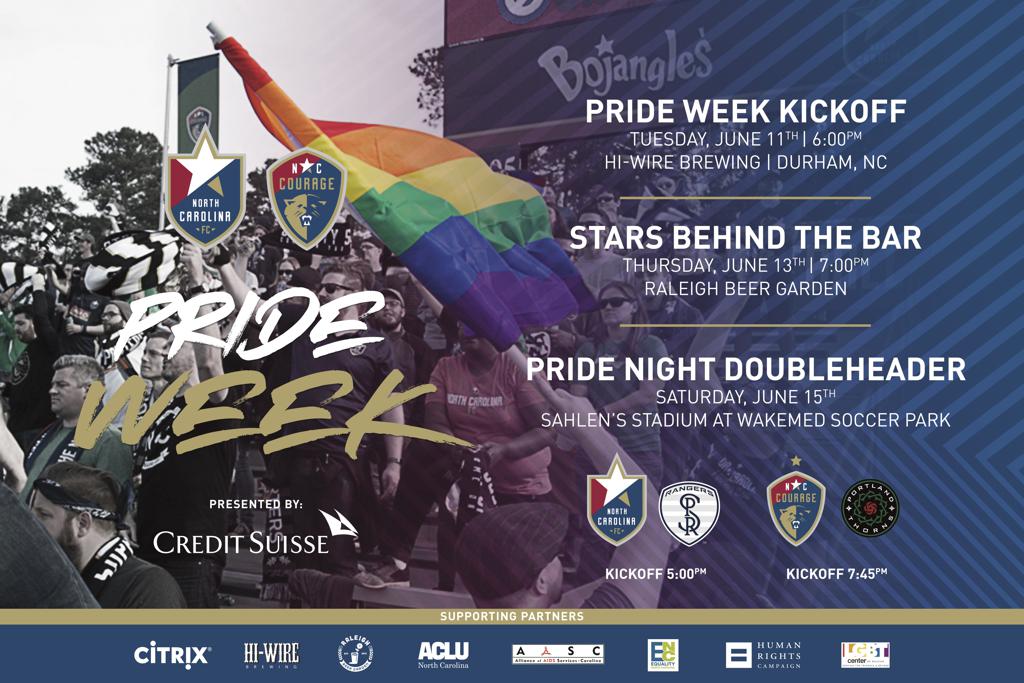 Cary, NC (May 23, 2019) - The North Carolina Football Club will once again celebrate diversity and inclusivity with Pride Week activities starting on Tuesday, June 11 and culminating in the club’s Pride Night on Saturday, June 15 with the NCFC and NC Courage doubleheader. Pride Week is presented by Credit Suisse and supported by Citrix, Hi-Wire Brewing, the Raleigh Beer Garden, Alliance of Aids Services Carolina, ACLU of NC, Equality NC, Human Rights Campaign, and the LGBT Center of Raleigh.

Pride Week continues the club’s commitment to celebrating diversity and equality while supporting LGBTQ causes. Over the last few years, the club has hosted events, tailgates and games in support of equality and celebrating the ability of the world’s game to unite people from all walks of life.

Pride Week will kick off on Tuesday, June 11 at 6 p.m. with an event at Hi-Wire Brewing in Durham. Players from both NCFC and the NC Courage will be in attendance to mingle with fans and sign autographs. Additionally, there will be soccer pool as well as food trucks for hungry fans.

On Thursday, June 13, at 7 p.m., the Raleigh Beer Garden will host Stars Behind the Bar, an event in which NCFC and NC Courage players will act as guest bartenders and socialize with fans. Tips collected by the players will benefit Austin da Luz’s Playing for Pride initiative.

Da Luz started Playing for Pride in 2017 as a way to garner attention for LGBTQ issues while raising money for different organizations that benefit this often-discriminated against community. The initiative continues to involve soccer players across leagues from all over the world, who pledge money for starts, goals, assists and clean sheets, and has raised over $30,000 to date. For the second consecutive year, Playing for Pride will run during the whole month of June and will benefit Athlete Ally, an organization whose mission is to end the rampant homophobia and transphobia in sport and to activate the athletic community to exercise their leadership to champion LGBTQ equality. Click here for more information on how to donate to Playing for Pride.

Pride Week will conclude on Saturday, June 15 as NCFC takes on Swope Park Rangers and the NC Courage face the Portland Thorns in a doubleheader starting at 5 p.m. For the occasion, the club will debut pride-themed merchandise, including a rainbow star hat and co-branded pride scarves. A portion of the pride merchandise sales will also benefit Playing for Pride.

One ticket will provide access to both games for the June 15 doubleheader and tickets are available online at Ticketmaster.com or by calling the Coastal Credit Union Box Office at 919.459.8144.